A Wimpy TV advert from the 80s features in today's post, and it aired in the UK 33 years ago in JUne 1988 - I've made you feel very old now! It features The Drifters 1965 hit song "Come On Over To My Place" - you can view it further down the page.

The joyful ad makes clever use of the song's lyrics by replacing "Hey girl, we're having a party" with "Hey you, we're having a Wimpy", with four of the staff members miming and dancing to the song. I say staff, but there's a good chance they're actors pretending to be staff, but who knows?

So when was the last time you ventured into a Wimpy? Well, you may be surprised to learn than that there is still a chain of Wimpy restaurants in the UK. There are 71 outlets, apparently, although I haven't seen one in a long time. Back in 1988, there were over 400, but in 2021, Wimpy announced they were planning to expand once again in the UK, so there may well be one coming to a town near you! These days, however, it's more than likely it will be in an out-of-town precinct by the roadside.

Back in the 70s, Wimpy Bar (as it was then known) was the best-known fast food burger joint in the UK, but during the 1980s, the chain was facing stiff competition from McDonalds. Indeed, the owner, United Biscuits (who bought the brand from J. Lyons & Co in 1977), sold the company to Grand Metropolitan in 1989, and during the 90s, many Wimpy Bars were rebranded as Burger King.

There were several differences between McDonalds and Wimpy that made me prefer the latter. Firstly, the staff would serve you at the table, whereas in McDonalds, you had to queue for your burger before finally being able to sit down. Also, the burger and bun were of a higher quality and felt less processed at Wimpy, and they called their fried potatoes by their proper British name, "chips" not "fries" - I detest that word!

I do remember receiving poor service on one occasion during the 1970s when I went for a meal with my parents and my Mum's friend in Coventry - yes, we'd been sent to Coventry! My Mum and her friend received their order quite quickly, but half an hour later, long after they had finished their meal, Dad and myself still hadn't received anything! I'm not sure if the store policy was not to serve males, but My Dad was fuming and it turned out they had completely forgotten about us!

Nonetheless, my experience with Wimpy was pretty positive overall, but it's possible that the "quality over quantity" ethos made the brand unable to compete with the fast-food outlets. As you will see in the image below, they were trying to imitate McDonalds in 1988 but were fighting a losing battle. Personally, I think it was a move in the wrong direction.

Wimpy's main headquarters is based in Johannesburg, South Africa, and they have 459 outlets here. The company was founded as Wimpy Grills in Bloomington, Indiana in 1934. At its peak in 1947, the chain had 26 outlets in the U.S. 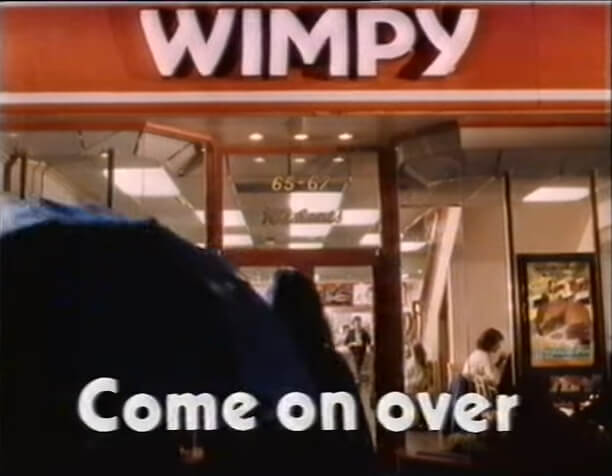