Posted by Mark Nobes on June 22, 2022
The adverts in today's video aired on 21st October 1982, during an ad break whilst airing the 1974 movie Gold, which starred Roger Moore and Susannah York.
The first ad is for American Express (is this still a thing?) and the slogan used at this time was "Don't leave home without it". Any 80s kid will worth his salt will definitely recognise Gwyneth Powell, who raises her eyebrows as her husband is presented with the bar bills from his "little celebration last night". She certainly did a lot of eyebrow raising as the headmistress in Grange Hill! 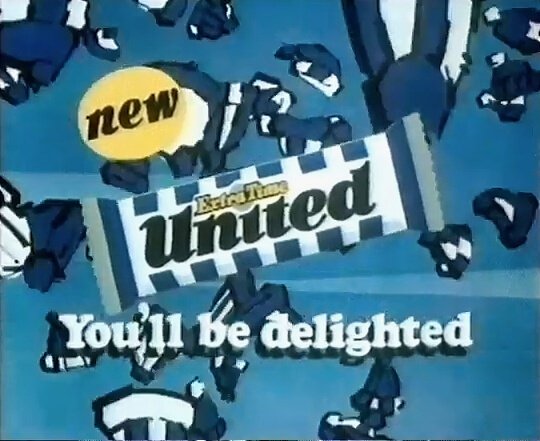 Next up we have the new Extra Time United "that's made us all delighted!". This was a bigger version of the original United chocolate biscuit, which, with it's crisp honeycomb layer, I really used to enjoy when I found it in my lunchbox, along with Trio and Breakaway. They came is multi-packs, and the iconic blue and white striped wrapper is instantly recognisable to those of us who grew-up in the 70s and 80s. I'm not sure when it was actually discontinued, but it definitely isn't available to buy today.
The third advert is for ASDA Superstores, and features a cheerful little song telling us how it's "all together better". You really don't see adverts with catchy tunes like this these dayys, and I think it's a great shame. Although I don't remember the song, I do remember the melody from the final part of the ad and the slap of the back pocket, which was used regularly in their 80s adverts  This ad shows us a wide variety of products, including portable TV sets, bread, tennis rackets and a football (in the sports section), and bottles of wine. 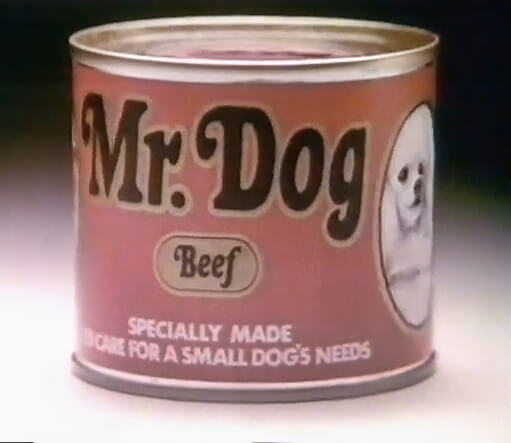 Do you remember Mr. Dog dog food? I certainly do, although as it was "Specially made to care for a small dog's needs", we never actually bought it for big German Shepherd. Let me tell you, he had a ravenous appetite and really used to wolf down his food (I really should have taught him some table manners!) so this would have take him about 2 seconds to bolt down! Mr. Dog contained "tempting meats" like beef, liver and kidney, and essential vitamins and minerals. The brand name was changed to Cesar (I'm not sure of the exact year this happened) and is still available to buy in 2022.
Our fifth advert is for a painkiller called Pharamcin, which is advertised as "Fast relief from pain in a capsule". I really don't remember this brand at all, but I do remember my Mum always used to buy Hedex at the time. Capsules were actually pretty unique at the time to buy over-the-counter. These days, I buy the supermarket's own brand of paracetamol (in the old school tablet form) as it is just as effective as the expensive brands, and substantially cheaper. 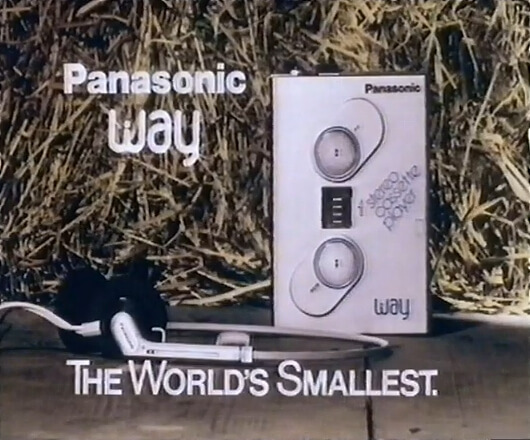 Next we have the Panasonic Way stereo cassette player, which was their take on a Sony Walkman. It's claimed in the ad that this is "the world's smallest". Back in the 80s, this was the only way to listen to your personal playlist of music through headphones while out and about. More often than not, my cassette (mixtape) contained songs I'd recorded from the Top 30 countdown.
The final advert is for Rumbelows Bond, and features a cartoon version of  Kenny Everett, with his own narration. The Bond gave free delivery and service. Their slogan at the time was "We save you money and serve you right". Back in 1982, many families would rent their electrical equipment (particularly TV sets) from Rumbelows, as they were very expensive to buy outright.
Rumbelows was founded by Fred Dawes in 1969 (the 90 stores used his name until 1971 when it was bought out by Thorn Electrical Industries) and became officially defunct in February 1995. Apparently, the chain never made a profit, and was losing around £12 million per year before they were closed down!
Monster Munch Advert 1986 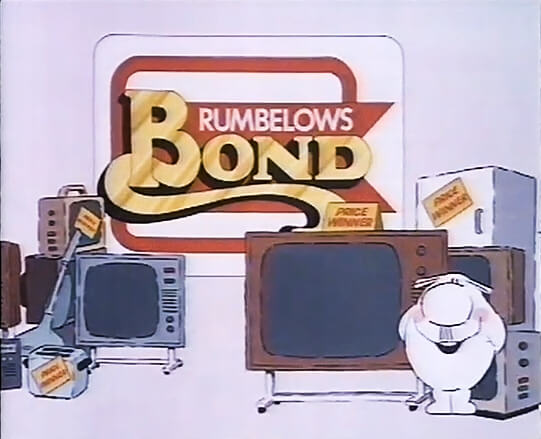