Although I have never owned a Renault, I am quite fond of French cars, and owned a Citroen AX back in the late 80 and 90s. This classy advert for the Renault 25, features a very attractive middle-upper class couple (David and Joanne) dropping their son off to school and then driving back to their large country home, with classic music playing in the background, so the ad is definitely aimed at the aspiring middle classes and business people.
During the trip home across country, David reveals that he is going to start his own business. However, David also reveals "There's something else. The company car is going to have to go back". Joanne replies "You're not being a bit hasty about this are you?". The ad ends with the slogan "Renault 25. One of your better decisions."
The Renault 25 was an executive car built from 1983 to 1992 in Sandoville, France, and replaced the 20/30 range. The 25 was superseded by the Safrane, which was built from 1992 to 2000.
Even the entry-level models included the luxury of power steering and electric windows (which is standard today, of course), but higher-end models included electric mirrors, power door locks, a Philips sound system, air conditioning, power trunk control, leather interior, anti-lock brakes and a whole lot more besides. There were 7 levels to choose from.
Now, I remember that Citroens were very fuel efficient, and it seems the French build their cars with fuel economy in mind. The Renault 25 was one of the first mass-produced, aerodynamic cars, and was the most fuel-efficient car in its class in the early years.
A phase 2 model was introduced in June 1988, and every panel was re-designed to give a smoother finish. There was a new front-end and new tail lights, a new front suspension and an improved interior.
French cars have always had a bit of a cult following in the UK, and they have never been as popular as the Ford, Austin/Rover and Vauxhall models. Indeed, no French model made it into the UK top ten during the 1980s and 90s.
You can't get better than a Kwik Fit Fitter advert 1980s
80s Cars at my website Simply Eighties 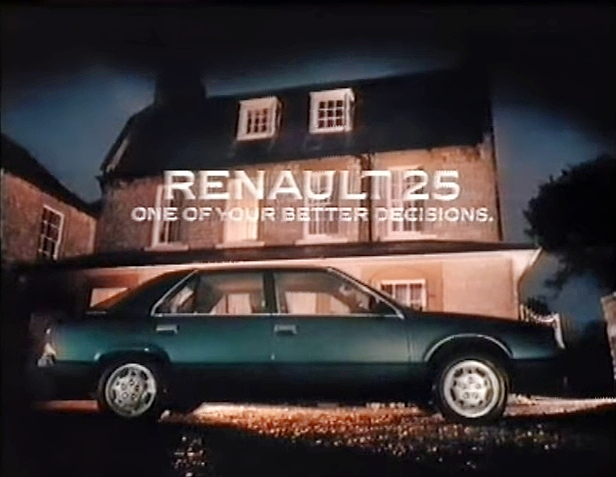