Some adverts from the 1980s are definitely more memorable than others, and this advert for Clearasil medicated lotion (which features Patsy Palmer before she became famous for playing Bianca on Eastenders), is definitely one I remember quite vividly. Actually, I thought I had forgotten about it until I spotted it on Youtube today, but as soon as I watched it again, I felt like I was a spotty teenager back in 1989. Just how much of this advert has stuck in my head surprised me. I can't remember what I did five minutes agon, but I can remember pretty much all of this advert!

Excessive drinking in smoke-filled nightclubs, followed by a dodgy kebab, certainly did nothing for your complexion, so it was essential to always have a supply of acne cream to hand back in the 80s.

However, this is not an advert that did a lot for your confidence, and it made you feel like you shouldn't even bother trying to get a date if you had a spotty face.

Patsy Palmer plays a stereotypical rock-loving "greaser" who is prone to spots, giving the impression that if you're a leather-wearing rock chick, then you are guaranteed to have dirty, greasy skin. We are told by her sister that her regular cosmetic cleanser "just isn't enough" to deal with her spots. She goes on to tell us that "Clearasil cleanses pore deep to remove twice as much grease and help prevent spots".

We then see Patsy transformed into a prim and proper beauty, wearing a posh girly frock, styled hair and make-up, expensive-looking jewellery, and with a clear complexion - not a spot in sight, Not only that, but she then falls into the arms of the hunkiest man in town. Clearasil can do all of this? Hmm, it really is a miracle in a bottle! She also never break the rules of etiquette and now watches Songs of Praise, listens to Val Doonican and hugs trees on a regular basis.

Now, I've been trying to remember the name of the spot cream I used back in the 80s, but for the life of me can't remember it. I never used Clearasil, but it's interesting that the ad is aimed at girls, because us blokes also suffered from the same problem.

Before she joined Eastenders in 1993, Patsy Palmer played the part of Natasha in Grange Hill from 1985 tom 1987. However, this was only a minor role and she did not feature in any of the major storylines. Her Eastenders character, Bianca Jackson, married Ricky Butcher (played by Sid Owen) in 1997, which gained an audience of over 22 million viewers.

Clearasil was invented in the U.S. in 1950 by Ivan Combe. The brand is currently owned by Reckitt, based in Slough, England, who also own Dettol, Dispirin, Strepsils and Veet.

In 2000, the Clearasil brand became part of the Boots Group range. Boots Healthcare International was bought by Reckitt in 2016.

Clearasil is still available to buy in 2022, although the range of products is more expansive than it was back in the 80s. 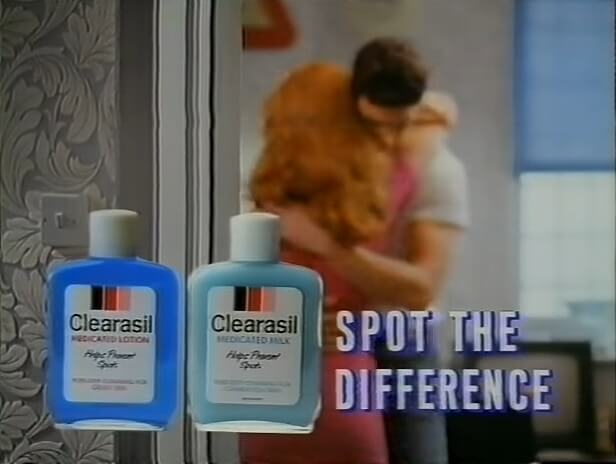