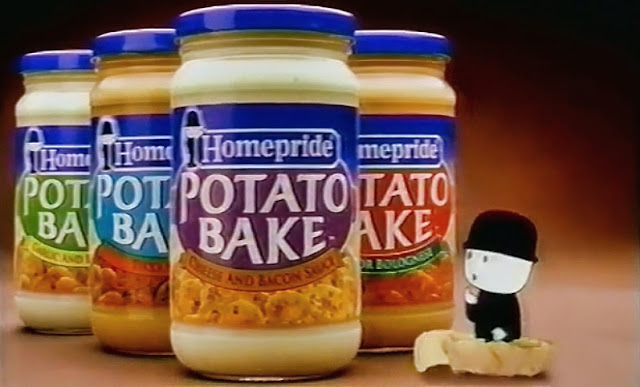 Do you remember using Homepride Potato Bake sauces on your potato dishes?

Well, if you've never them or simply can't remember them, I have included the UK advert from 1999 at the bottom of this post to jog your memory. It features comedy actor Richard Briers as narrator.

Now, I have to say that the advert does really tempt me to buy the sauce, and as someone who hates spending too long in the kitchen, this would definitely be a product I would consider today, although it is no longer available to buy, sadly.

In the first scene of the ad, a potato is being peeled to slowly reveal a jar of cheese and bacon flavoured Potato Bake, which is a clever idea.

Next, the sauce is poured over a dishful of sliced and layered uncooked potatoes, which gives you a very simple and tasty dish with very little effort at all, unless I'm cooking it, in which case it would probably end up as a complete disaster!

The cooked version is then revealed, which has a mouth-watering golden, cheesy topping.

At the ned of the advert, we are shown four jars featuring different flavours, which includes the aforementioned cheese and bacon, tikka masala, garlic and herb, and some kind of bolognese. Unfortunately, I can't see the writing on all of the jars on the video, which is a bit of an error on Homepride's part, as I definitely would have liked to have seen all of the flavours clearly on display.

Richard ends the ad by telling us it's "the most exciting thing to ever happen to the potato". Oh, and I can't write about the ad without mentioning Homepride Fred, of course, the bowler hat-wearing, black and white cartoon character, who is the company's mascot. He is still used on their labelling today!

The product was discontinued sometime in the early to mid noughties, I believe, so maybe it just never caught on with the public. I definitely remember my Mum cooking with it, and she was working long hours back then, so this would have been very convenient for her, allowing her to come up with a quick and simple dish.

Homepride do still make a pasta bake, and I have read many articles in recent times which suggest that the popularity of potatoes is in decline. I actually don't buy potatoes all that often these days as I find them a bit bland, although I do buy those pre-baked McCain baked potatoes and their Homestyle oven chips. 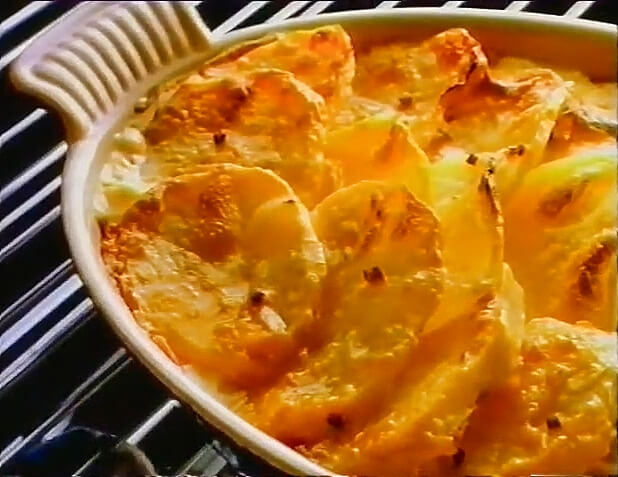