I have to admit that I don't remember all of the adverts I feature on this blog, but I definitely remember this funny advert for Batchelors Super Noodles, which first aired on ITV back in 1999. It stars a young Martin Freeman, just a couple of years before he became well-known for playing Tim Canterbury in The Office.

I do like to have a packet of the dehydrated snack to hand, and they come in handy for those days when I just can't be bothered to fanny about with potatoes or cook a proper meal. The less time I have to spend in the kitchen, the happier I am!

Any advert that includes a toddler is usually a winner, especially if they are the centre of attention. The young lad (who is called Thomas) is sat watching his Dad (Gavin) eat a bowl full of Super Noodles, while his partner is walking around in her bra in the kitchen and talking to him non-stop - we call it "yapping" in our neck of the woods. Of course, Dad isn't taking a blind bit of notice of her (he's a man, what else do you expect?), and mocks her with hand gestures, which the child is not amused by.

I'm not sure they would even allow this advert now, as merely suggesting that women talk too much would have the PC brigade up in arms! But if this didn't upset them, then the next part certainly would. 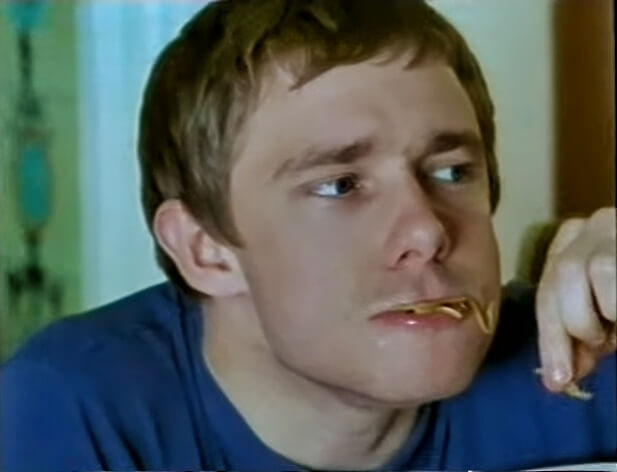 Yes, the really amusing part (some would say evil!) comes when Dad wipes his face on what he thinks is a cloth or towel, but actually turns out to be his partner's shirt. "Did I leave my shirt in there?", she asks him. Well, he certainly is taking notice now! So how does he get out of this one?

If claims of sexism hadn't already caused an uproar, then this next part would, more than likely, trigger an avalanche of complaints to Ofcom about child cruelty if it aired today. He puts the blame on poor Thomas by placing the shirt on him and smearing some of his noodle meal on him. "Oh, Thomas!" yells his Dad, which causes the poor lad to cry. But Dad has no sense of guilt whatsoever and carries on with his lie "Yeah, it's all very well doing that, mate, you've ruined the shirt, marvellous!".

The advert ends by displaying a packet of Chicken Chow Mein flavoured Super Noodles, which, I believe, are no longer available, sadly.

When were Super Noodles launched?

The Super Noodles brand was originally owned by Kellogg's and launched in 1979. Super Noodles Pots launched in 2017, and have proved to be hugely successful, taking a slice of the market from Unilever's Pot Noodle line.

Batchelors was founded in Sheffield in 1895. They are currently owned by Premier Foods.