Bisto Advert 1984 - Never In A Month of Sundays

The image of a family sitting around the table enjoying a Sunday roast is one that was used quite a lot in advertising back in the 1980s, and it's true to say that, sadly, participation in this British tradition has diminished quite substantially.

This amusing 1984 advert for Bisto gravy granules features the song "Never in a month of Sundays", and at the start we see a young lad in his bedroom having a lie in. Well, this certainly brings back memories of my teen years. Wake up before lunchtime? Not on your nelly! Thinking back, I did seem to need an awful lot of sleep back in my younger days!

The three men in the pop poster on his wall start singing "Is Trevor ever getting up? Never in a month of Sundays".

The next question posed in the song is "Will Dad ever get that garden cut?", as he stands chatting to his neighbour over the garden fence. Once again, it was men who mowed the lawns back then, but I wonder what percentage of men are still relied upon to do this today? I still see quite a large number of men mowing the lawns in my area, at least, so this is something that may not have changed as much as we would like to think it has. 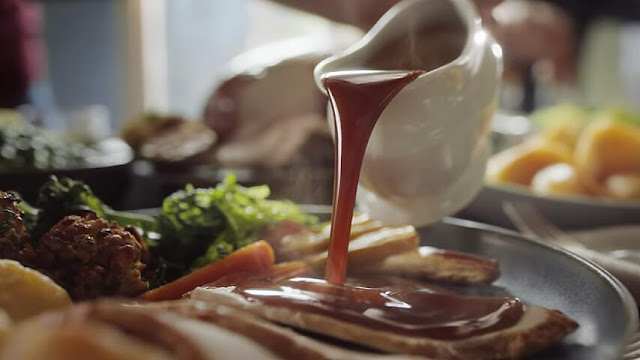 "Still there's one thing they won't miss out on" is the next line of the song and, of course, it's the Sunday roast, and you may recognise the mother who is taking the roast beef out of the oven. Yes, it's Carol Schell, who presented the BBC children's TV series Playschool from 1966 to 1988.

The advert ends with Trevor running into the dining room half dressed (forgetting to change his pyjama bottoms), and the Dad and daughter already sat at the table. The subservient Mum is still serving them gravy with her apron on. Of course, this image would be seen as sexist today, and the number of families sitting down together to enjoy a Sunday Roast is certainly substantially less than it was back in the 1980s. It's also true to say that you'll find many Dad's helping out with the cooking these days, too.

I do feel a sense of guilt that we relied on Mum entirely to cook our lunch for us, and I wonder, if my Dad was alive, whether he would feel guilty for never lifting a finger in the kitchen. That I'll never know, but I am glad that women are no longer expected to be the subservient housewife.

However, the demise of the Sunday roast, I think is a bad thing, and people today are spending far too long on the internet. Together time for the family is vitally important, and meals around the table are something that should definitely continue. Slouching in front of the TV trying to eat a meal and spilling half of it over your clothes is just not that appealing to me.

Bisto gravy granules are still popular today. The company was originally owned by Ranks Hovis McDougall, and the first Bisto product was a meat-flavoured powder which launched in 1908. The granules were launched in 1979. 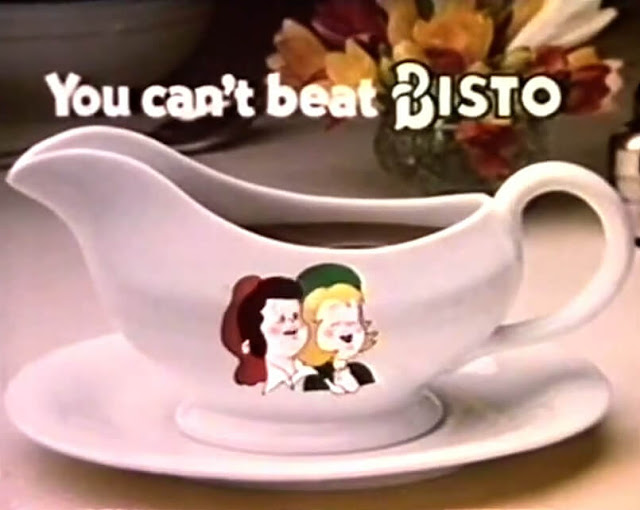