Howdy pardner! Adverts that feature a mini cartoon are always popular with kids, and also adults who just don't want to grow-up, like myself! This memorable animation for Nestle Golden Nuggets, is one that I definitely have fonds memories of.

The popular advert first aired in 1999, and it features a stereotypical Western theme set in the desert, with lots of mountain scenery and cacti. And what cowboy cartoon is complete without a "Ye-ha" and a "Howdy" thrown in for good measure.

The characters were created by Gary Dunn, and the animation reminds me very much of the much-loved Looney Tunes ads I used to watch as a kid in the 70s.

The bearded cartoon character is the miner Klondike Pete. However, he doesn't mine gold, he mines Golden Nuggets, and he has a trailer load of them. The Breakfast Bandits (Plum Loco Louie and Boot Hill Bob) want to get their filthy hands on them, but Pete's clever mule, Pardner (also known as Thorndike), has a couple of clever tricks up his sleeve to stop them. I'm not going to spoil it for you by telling you how he stops them - you can find out by watching the video at the bottom of this post.

The slogan used at the end of this as is "They taste Yeee-haa!!". I wonder if real cowboys actually do go around shouting "Ye-ha" every 10 seconds? Probably not!

Golden Nuggets were first launched in the 1972 by Nabisco, with the slogan "They're honey crunchin' good" However, they were withdrawn from sale in 1975. In the U.S., the cereal was marketed as Klondike Pete's Crunchy Nuggets. Before this, they were marketed as Winnie-The-Pooh Great Honey Crunchers (in rice and wheat varieties) but suffered from disappointing sales.

Then, out of the blue, came a big UK relaunch in 1999, with a £1million advertising campaign, including the TV advert in this post. If you were a child of the 70s, like myself, this was very good news indeed!

The crunchy, honey-flavoured cereal balls are still on sale today in the UK. Having checked the latest packaging on Amazon, I was pleased to see that both Klondike Pete and Pardner were on the front of the box - ye-ha! 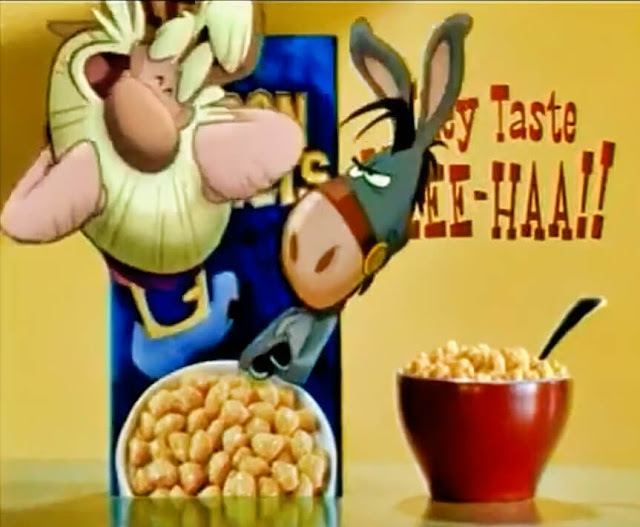