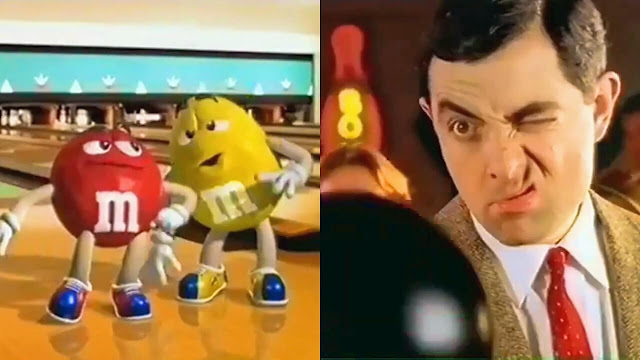 So which do your prefer, Mr. bean or M&M's chocolate candies?

Well, I'm going to sit on the fence and say that I like them both in equal measures, and sitting and watching an episode of Mr. Bean while eating a bag of peanut M&M's is my idea of heaven! I do also like the chocolate ones, but not quite as much.

This advert for M&M's chocolate and peanut sweets first aired back in 1997. It features Rowan Atkinson's hilarious child-like, selfish and destructive comedy character, Mr. Bean, trying his luck in a bowling alley.

I am a huge fan of the character, which was influenced by the silent movie stars of the 1920s. I just love his amusing facial expressions and his funny walk, and I am also a fan of Stan laurel, who also used a lot of facial expressions - who doesn't love a buffoon?

But it is also the clever storylines and the trail of chaos that Bean leaves behind him that I find so hilarious. It was very cleverly written by Atkinson, Richard Curtis and Ben Elton. 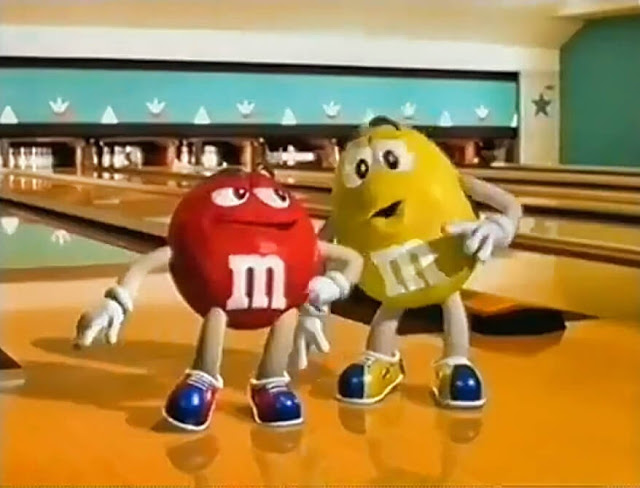 In the advert, we see two of the iconic M&M cartoon characters, one red and one yellow. The red M&M makes a strike with his first bowl. Then the yellow character asks the jubilant crowd "Does anyone fancy their chances?". Well, no prizes for guessing who will make an appearance now! Yes, it's Mr. Bean, who eagerly puts his hand up, as if still in the school classroom.

So we are about to see Bean bowl, and the two cartoon characters make fun of him as he is about to do so, although the red one is about to get his comeuppance! He bowls as only Mr. bean can, in a totally ludicrous manner, swinging the ball around frantically before aiming for the skittles. The only surprise here is that he didn't take out one of the crowd! He fails to get a strike!

With two pins remaining, the red M&M states with confidence "There's no way he'll ever knock those two down!". Bean gives him a dirty look, before picking up him up and using him as the bowling ball! As he lands, he takes out the two remaining pins with his arms - bravo Mr. Bean!

I do remember the clever slogan "The milk chocolate melts in your mouth, not in your hand", which certainly made M&M's a wise choice during the warmer weather, especially if you fancy some chocolate while in your car! But I also remember it when it was used in the 80s for Minstrels.

When were M&M's Launched?

M&M's are made by Mars Inc. and were launched in 1941. They are similar to Galaxy Minstrels, which used the same slogan in the 1980s, and Treets, which were discontinued in 1988 and replaced by the more colourful M&M's peanut.