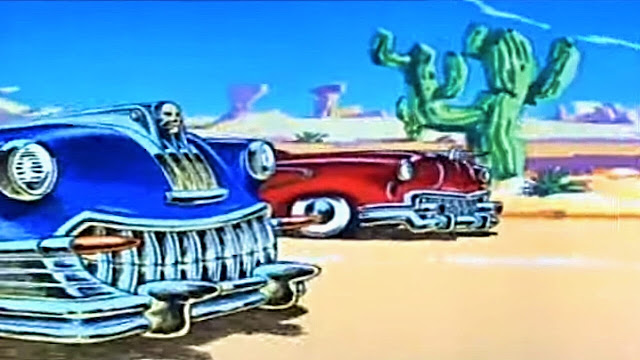 A memorable song or jingle is what really makes an advert an instant classic, and this advert for Milky Way features a tune that is almost impossible not to remember! It features an animated race between a red car and a blue car, and originally aired on 1989, with repeat showings into the 1990s.

However, a whole new generation was also able to enjoy watching this ad, as it was shown again on its 20th anniversary in 2009, although with an edit at the end which I'll come to in a moment. The advert you can view at the end of this post is the original, unedited one. I do remember that when the new advert was shown, I instantly remembered almost all of the lyrics to the song! Speaking of which, here they are...

So the animation is set in Playville, and the storyline is based upon the red car becoming too fat and heavy because it has eaten too heavily, and, inevitably, it plunges downwards into the gap left by where the bridge once was. The blue car can jump the gap because he took the Milky Way, the smarter, lighter option.

The advert's rather long ending slogan shown on the billboard is "The sweet you can eat between meals without ruining your appetite". I remember exactly the same slogan being used in an advert from 1972, so it has served Mars UK well. You will note in the image of the ending of the advert below, that a Christmas single is advertised. I have been unable to find any info regarding the song being released as single, and having checked the 1989 Top 100 December chart, I couldn't find anything here either.

This slogan was not used in the later 2009 advert. Instead, "Lighten up and play" was used, which was then replaced by an ad for Milky Way Stars when they launched.

The chocolate bar launched in 1935 in the UK. Confusingly, the U.S. version of Milky Way launched in 1924, but is actually the same as the UK's Mars bar. The U.S. Mars bar is different and contains toasted almonds.

I haven't eaten a Milky Way in a very long time, but I do like the light nougat whip and the fact it doesn't fill you up too much, making it an enjoyable light snack. I think I might just buy a pack next time I'm in the supermarket.