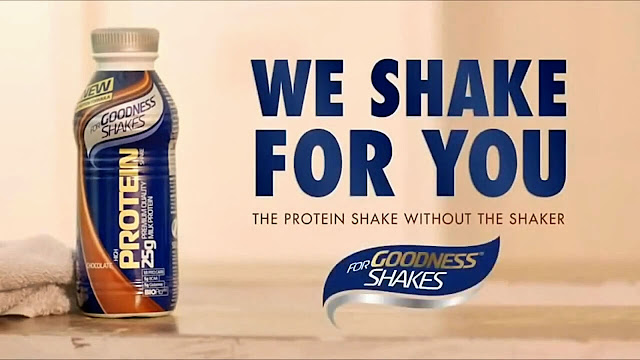 Every so often, a gem of an advert comes along that cheers me up for the rest of the day. I have a real gem for you today, and it comes (forgive the pun) in the form of a banned UK advert for For Goodness Shakes Protein Shake. You can view it at the end of this post.

I decided to put an age restriction on this video just to be on the safe side, as although it doesn't actually show anything explicit, the theme could possibly offend someone, although everyone who has commented on my channel so far has found it hilarious, thankfully! But you can't be too careful, these days!

The video is narrated by a Youtube friend of mind, Jane J, and kind of happened unexpectedly! I commented on one of her videos that she has "a beautiful voice", and then, to my surprise, she offered to do a voiceover for on a video - who could refuse? She has such a lovely, English accent, and I thought she would add a touch of class to the video, although, I'm not sure you can make this particular video classy, given the theme!

Now, I'm going to have to be very careful with my choice of words and descriptions in this video, so here goes!

When I first viewed the first scene at the bus stop, I really thought the young lad and the elderly lady were going to engage in an amorous session of kissing, which would have been hilarious in itself, but when he started the shaking I was not only surprised, I was also in stitches!

It's the look on the guys faces that really makes this ad, they are priceless. The looks that the two guys with shaven heads give to each other in the third scene are just hilarious.

But it's the final lift scene that I enjoyed the most, when the bearded guy appears to have a messy accident involving a young lady when he finally ends his shaking session. That's the more polite way of putting it, anyway. His facial expressions are just brilliant, and it's the perfect way to bring the advert to a climax, for sure!

The main point of the ad is that the protein shake has already been shaken for you, with the slogan "The Protein Shake Without The Shaker".

I hope you all enjoy watching this one as much as I did. This product is still very much available. Head over to the official For Goodness Shakes website to find out more.

The founders were fed up up with drinking terrible, powdery protein drinks, and so decided to create their own company in 2004, producing tasty, nutritious and ready-to-drink protein shakes.