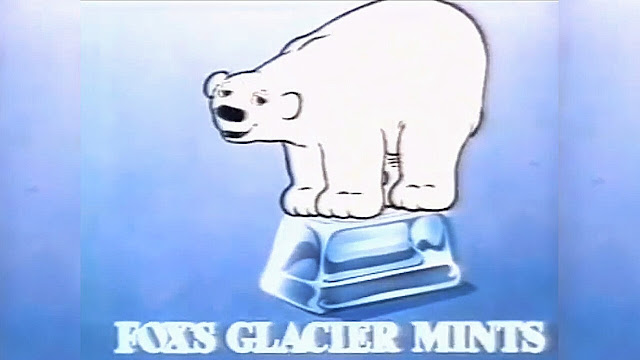 Those of you who lived through the 1980s, will certainly remember that polar bear above, who appeared alongside a fox in the Fox's Glacier Mints adverts. Each advert showed a short animation.

Well, I have a real treat for you in the form of a compilation of four amusing adverts featuring four different mini cartoons, which you can enjoy watching in the video at the bottom of the page, and, I believe, they are all from the 1980s, but don't hold me to that!

In many, but not all of the adverts, the fox (named Eric, after the inventor of the mints) tries desperately to claim what he believes is his "rightful place" on the glacier mint, but that stubborn bear never did move off it, did he, and he always remained as cool as a glacier mint!

I've always liked these boiled mints for many reasons. Firstly, I like the fact they are so clear and resemble an ice block. They also give a cool sensation on your tongue and have a smooth texture. A lot of mints can be quite chalky, but these are certainly not, and they have a natural peppermint flavouring, too. The mints are also long-lasting, which means a bag will last for quite a while. I'm sorry if I'm sounding like an ad campaign here, but I really can't fault them!

Fox's Glacier Mints were created by Eric Fox, and launched in the UK in 1918. They started life as Acme Clear Mint Fingers, but Fox's wife suggested he change the name, and they officially became Glacier Mints in 1919 - behind every great man there is a great woman! The individually wrapped sweets were introduced in 1928.

The polar bear is called Peppy, and he was the creation of Clarence Reginald Dalby. He was introduced into the advertising campaigns in 1922.

So what do we have in my compilation video?

In the first advert, the fox is pretending to be invisible, and he has wrapped himself in bandages and is wearing sunglasses, just like the Invisible Man did in the TV series and movies. He proclaims "I am the invisible fox, who's rightful place is on that cool, clear, invisible Fox's Glacier Mint." However, the bear "accidentally" pushes the fox off the mint with his back legs and replies "Sorry Fox, I didn't see you there!".

In the second advert, we see the fox pretending to be a fireman. He runs around in a panic with his hose shouting "fire", as firemen do! Of course, the bear remains cool and the fox ends up standing on his hose and then soaking himself!

The bear is fast asleep in the third ad, but the fox wants him to wake up and move him off that mint, so he open the blinds shouting "Wakey wakey bear, rise and shine!". He tries to convince the bear that he needs to be outside in the lovely weather, but the bear is having none of it! Undeterred, the fox states that "it's a lovely morning, nice and refreshing". The bear calmly asks him "Is it as refreshing as a cool, clear Fox's Glacier Mint?". "Err, no!" replies the fox, as he pulls the blinds back down again.

The fourth and final ad sees the fox struggling to locate the clear mint, and, inevitably, he ends up running into it and knocking himself out!

I hope you enjoy watching the ads, I certainly enjoyed watching them again after all these years! 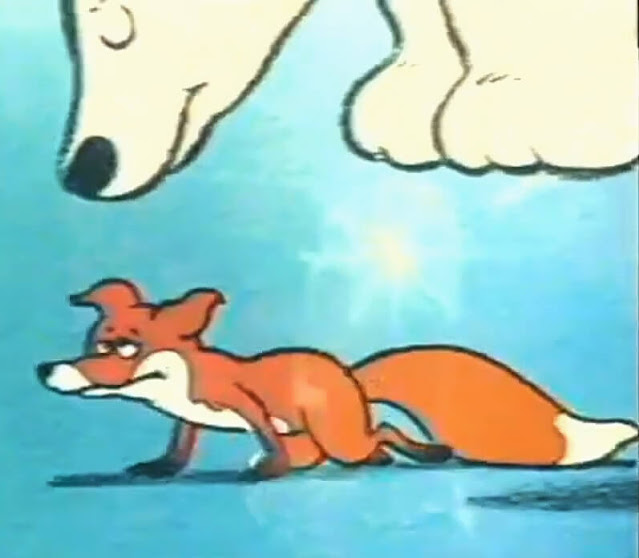