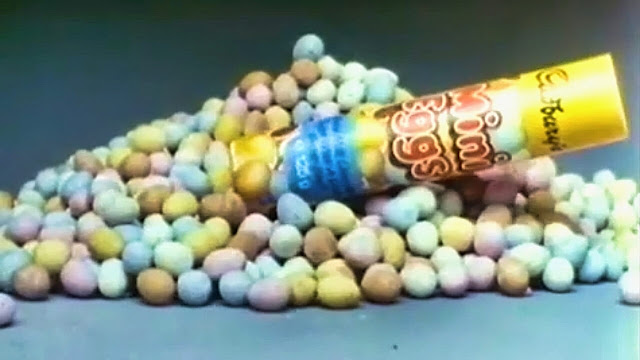 Even though the contents of the bag seems to have shrunk somewhat over the years (the bag is now three quarters filled with air), I do still enjoy my annual treat of Cadbury's Mini Eggs each spring. I say spring, but they were on sale in January in my local supermarket this year (2022). But it is not just biting into that crisp candy shell and soft, creamy chocolate that I find so appealing, I also adore that wonderful, mouth-watering aroma that hits you when your first open the bag.

The advert I am featuring today is from 1989, and I do remember this one. It features a series of animations hand-drawn onto a mini egg, accompanied by some egg-scrutiatingly corny egg puns!

First we see a runner who, the narrator tells us is "egg-ceding the speed limit". He goes on to say "My goodness, he's going like an egg-cocet (as in Exocet missile), and if he isn't careful, he's going to egg-splode!, egg-sposing the delicious Cadbury's Dairy Milk chocolate inside that sugar-coated egg-sterior."

Just when you'd thought every terrible egg joke had been used up, the narrator ends the advert by telling us to hurry, because "after Easter they'll be egg-stinct", and this joke is accompanied by an exploding dinosaur.

It's a fun advert, and I do much prefer the old hand-drawn animations to the CGI ones - I really miss the old school cartoons from the 80s. 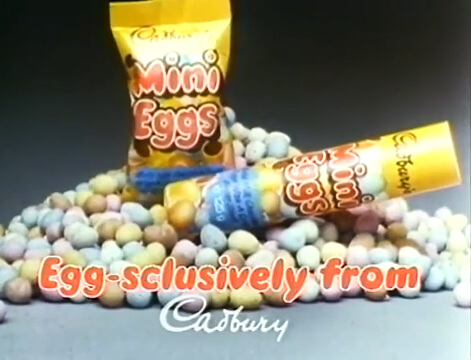 When were Cadbury's Mini Eggs Invented?

Cadbury's Mini Eggs were invented in the 1960s and officially launched in 1967. They were originally produced at their Keynsham plant in Somerset, England, until early 2010. Production moved to Bielang Wroclawskie in Poland in February 2010.

The original colours, were white, yellow, pink and light blue. The light blue egg was eventually replaced with a purple one with speckles, although I am unsure of the exact year this happened.

Can You Buy Mini Eggs All Year Round?

No. Cadbury's Mini Eggs are only made available for around three months leading up to Easter Sunday and are then withdrawn from sale until the following year. However, you can buy other brands of Mini Eggs after the Easter period, such as those at Flossy Treats.

Have you ever had a Mini Egg Doughnut? 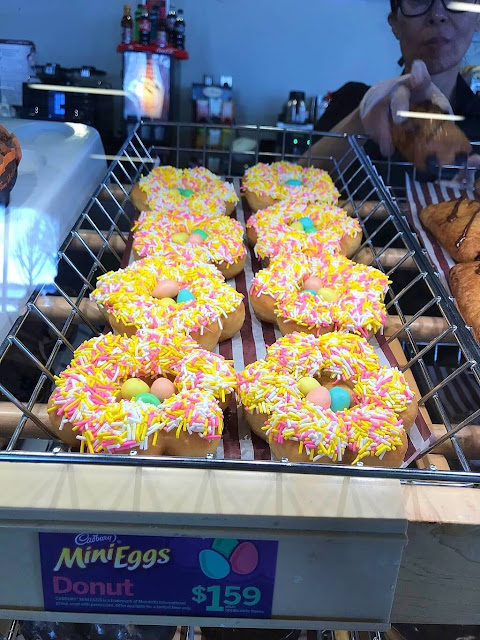