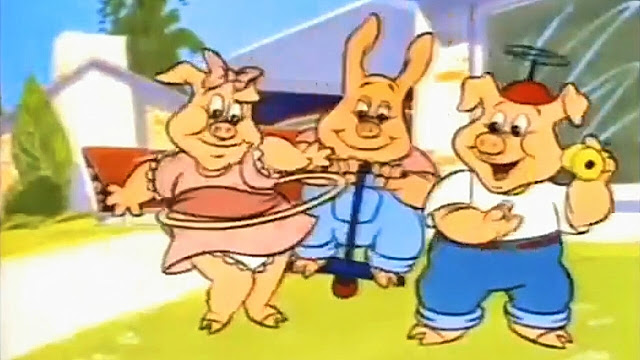 Just about everyone knows the classic, dark tale (fable) of the Three Little Pigs, but Cadbury's take on it is rather different for this short cartoon advertising their Dairy Milk Buttons, which first aired back in 1993. You can view it further down this post. By the way, did you know that the pigs were originally pixies? Keep reading...

Now, although the wolf does start to huff and puff, he decides not to blow their house down, but what changed his mind?

The advert starts with the three little pigs enjoying some innocent retro fun in the garden, accompanied by some retro flutey music in a similar style to that used in the classic Warner Bros. cartoons. The female piggie has a hula hoop, the male at the back is bouncing on a pogo stick, and the other male pig is playing with a Yo-Yo while wearing one of those helicopter hats. Such toys were very popular back in my 70s childhood.

The cartoon has a strong retro vibe, and next we see the big bad wolf peering from behind a 1950s style car which has those weird, fin-shaped tale lights that were popular at the time. The wolf has a classic, sinister laugh, and this is accompanied by some silent movie style piano music and xylophone crescendos, to give a sense of danger. The three little piggies are petrified, of course, and drop their toys before running into the house at breakneck speed. They quickly pull down the blinds and can be seen peering through the shutters.

Next, we see the wolf standing outside their house on the front lawn and telling them "I'll huff... and I'll puff... and I'll...." At the same time, a young toddler boy is eating from a bag of Cadbury's Buttons while being pushed along in a pushchair by his mother (we only see the bottom half of a floral dress and high heels, so I'm assuming it's his mother and not his father who is into transvestism). Before the wolf can complete the infamous line, the young boy accidentally flips one of the Buttons towards the wolf and it bounces off his snout and into his mouth.

Suddenly, something quite miraculous happens! Instead of a big bad wolf, we have a rather very nice wolf indeed! The pigs start singing a jaunty little song; "He won't huff, he won't puff, he's not tough, he's not rough...", and the wolf has taken a job as a lollipop man. complete with a "Stop" sign and a cap, and he helps them across the road. Within seconds he has gone from threatening to destroy their home to helping them across the road, and all because he ate a chocolate button! Hmm, I wonder if this would work on a certain tyrannical madman who springs to mind right now. Sadly, I think not!

The ad ends with the female narrator telling us "Goodness knows how Cadbury's Buttons do it!".

When were Cadbury's Buttons Invented?

The button-shaped milk chocolate pieces were invented in the late 1950s and officially launched by Cadbury in 1960. Creamy-White Buttons were launched in 1990, before eventually being rebranded as Dairy Milk White Buttons.

I do remember my Mum taking the wise decision to buy me white chocolate as a child, and I believe this was after the hot sun melted the milk chocolate in my hand, which ended up smeared all over my face and clothes, which made me look like I'd had a severe case of diarrhoea!

The classic, much-loved tale was first printed in 1840, although the story itself is quite a lot older and, believe it or not, started with three pixies and a fox! It was set in Dartmoor, England.

The version that I read in my 1970s childhood was from the Ladybird Well-Loved Tales series, and it's a wonder I ever slept at night as it's surprisingly dark! The basic plot is that the wolf blows down the first pig's house made from straw and then eats him. Then he blows down the second pig's house made from sticks and devours him, too. Thankfully, he failed to blow down the brick house of the wise third pig. The angry wolf tries to climb down his chimney, but the pig places a pot of water in the fireplace and the wolf falls into it and is boiled alive!

When I look back at this tale, it really is pretty grim, it has to be said, but it taught me that the world is full of some deeply nasty characters. Better that than to be wrapped in cotton wool and pretend that everyone is thoroughly nice and decent, because they certainly are not, sadly. 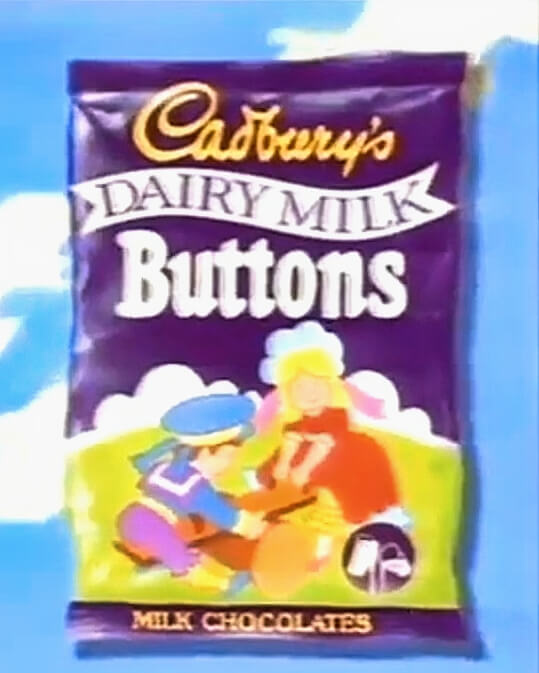 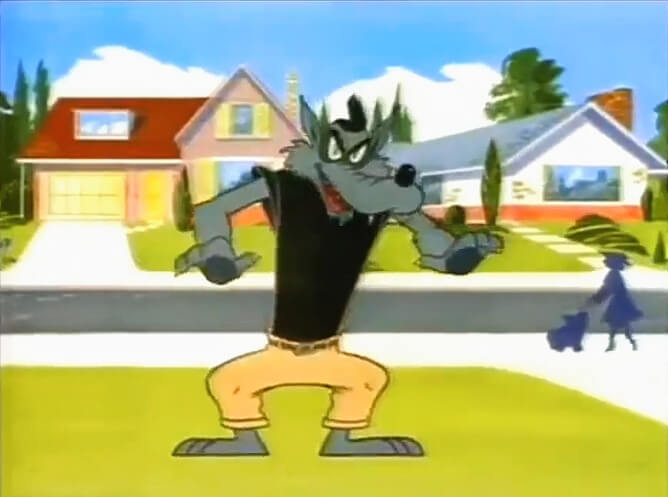