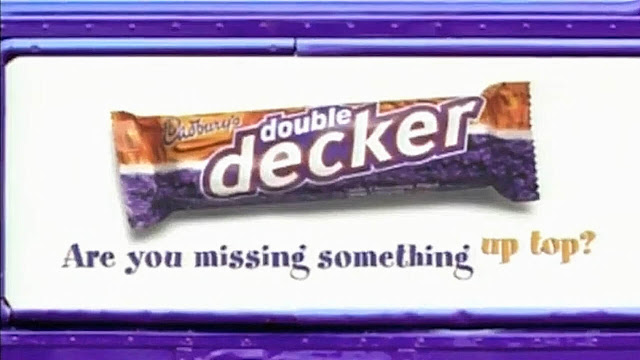 This quite bizarre TV advert for Cadbury's Double Decker, features the eccentric and zany British comedian Charlie Chuck, and it aired in 2001. It features a quirky joke about a Persian rug, and is set on board a double decker bus.

Looking like what can be best described as a Willy Wonka/70's Doctor Who hybrid on LSD, the wild-haired comedian takes us on a tour of the bus, while telling us a joke about walking into a sweet shop and asking for some "Cadbury's chocolate with some crispy cereal, some chewy nougat, up there, and a Persian rug!". Sadly, I didn't find it very funny and I'm still waiting for the punchline. Nonetheless, his unique style of delivery is certainly entertaining!

You may have spotted the clever "Barking" sign while he was at the wheel of the bus. Now, if I ever boarded a bus and spotted this guy at the wheel, I would be getting off it again pretty damn quickly, even it was still moving!

The advert ends with the very apt slogan "Are you missing something up top", which, quite clearly, this guy is! It's also clever, because it is also referring to the fact that many other chocolate bars do not have two distinct layers of an equal size.

When was Cadbury's Double Decker Invented?

The Double Decker chocolate bar was invented in 1975 and launched in 1976. It features a top layer of whipped nougat and a bottom layer of rice cereal (similar to Rice Krispies), all covered in a layer of smooth milk chocolate.

The original bar also contained raisins, but these were removed sometime during the 1980s due to consumer demand after Cadbury conducted a survey. 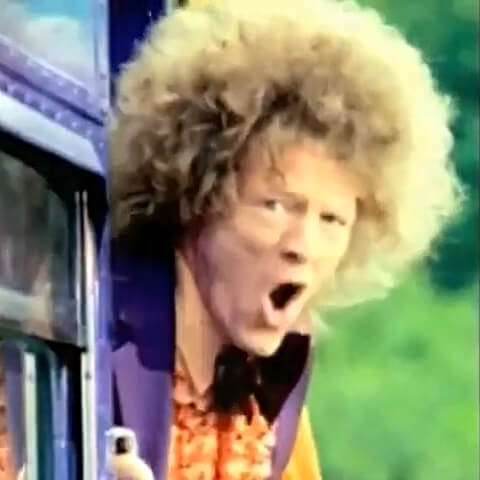 Who the F**k is Charlie Chuck?

He is actually a character portrayed by the comedian David Kear, and he started his career as a drummer, working with several 1970s bands.

After this, he turned his hand to stand-up comedy, and his surreal character became more widely known in the 1990s, after appearing on the 90s talent show Sky Star Search and then on the late night TV series The James Whale Radio Show, which aired both on TV and radio. His stage act would often involve smashing up a drum kit.

You may also remember him as Uncle Peter in the BBC2 comedy series The Smell of Reeves and Mortimer, which originally aired between 1993 and 1995.

His eccentric outfit worn in the Cadbury advert (complete with frilly ruffle shirt) definitely reminds me of those worn by Jon Pertwee during his time as the dandy third Doctor in the 1970s. His hair is also like an exaggerated, over-sized version of Pertwee's, and the purple colour, of course, is similar to the Willy Wonka character portrayed by Gene Wilder in the 1971 film. The purple and orange is, of course, representative of the wrapper of the Double Decker chocolate bar.

In 2014, Chuck appeared in the film Boy Called Bremner, which is set on a Leeds housing estate.

Cadbury's Buttons Advert with The Three Little pigs from 1993