Now, I'm pretty sure that many of you will certainly remember this TV advert from the 1980s. It's the classic Kwik Fit ad featuring the Cockney style song "You can't get better than a Kwik Fit fitter (we're the boys to trust)", which resembles the style of the old Chas & Dave knees-up pub songs. It also features the fitters doing a Madness style dance routine.

The adverts first aired in 1984, but the one featured at the bottom of this post is from 1988, I believe.

So here are the lyrics for you to peruse;

"Every Kwik Fit fitter, has to go to school,

we teach them all there is to know, each little golden rule.

Our fitters have to be first class, only the best will do,

when they pass with flying colours, they're official boys in blue.

So drive on down to Kwik Fit, we're waiting just for you,

every product's guaranteed, you'll love their prices, too.

You can't get better than a Kwik Fit Fitter (repeat 3 times),

we're the boys to trust"

Look out for a white Ford Escort, white Ford Sierra estate and a cream Austin Metro in the garage. I'm unsure which model the grey car is, although it looks very much like a Cortina. I was actually working at a local Ford garage at this time as a parts salesman, although it wasn't actually a job I chose to do, it was out of necessity to earn a living! At least, it enabled me to buy a red Austin Metro City X, which was a car that had its fair share of troubles let me tell you!

I have never used a Kwik Fit, to be honest with you, as I always go to a local garage/car dealer where I bought my car from. Nonetheless, I can see that if you bought a car from one of the many online websites or at an auction, or you maybe if you have quite an old car, then Kwik Fit would be an ideal place to go to get your car serviced, or maybe replace a tyre or exhaust etc.

There are currently over 600 Kwik Fit depots across the United Kingdom, and many thousands across Europe. The very first one opened in McDonald Road in Edinburgh during 1971. 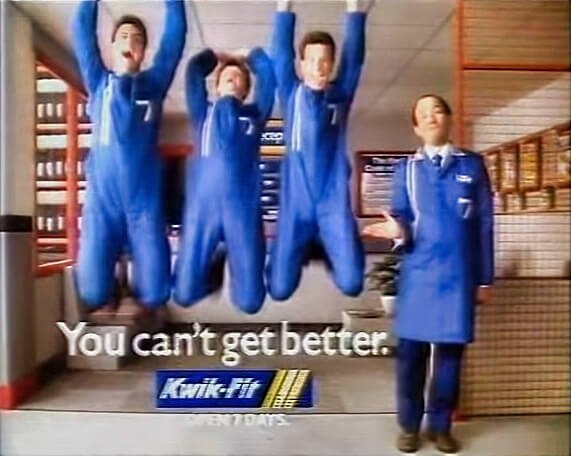