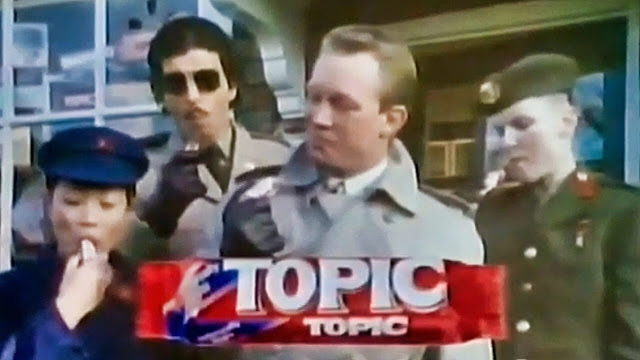 So when was the last time you had a Topic chocolate bar? I haven't had one for quite some time (yes, they are still being made by Mars), but I do remember it being advertised quite frequently back in the 1970s and 80s.

The setting for this amusing advert (featured at the bottom of this post) is an opulent palace, which has five limousine cars parked outside the front entrance. A sharply dressed chauffeur rakes out a Topic bar from his top jacket pocket and starts biting into it. There are hungry looks by the other four security and military people, who are the drivers of the other vehicles.

The narrator suggests that "some people will stop at nothing to taste for themselves the delicious roast hazelnuts, nougat, caramel and double thick milk chocolate in Topic". He goes on to say "But surely even Topic couldn't drive them from their posts... don't you believe it!".

As the VIPs are seen leaving the entrance of the palace, it appears that their four drivers have left them stranded, and have decided that their rumbling stomachs are far more important to them. Yes, they all decided to head for the nearest shop to try Topic for themselves. The only VIP to receive their lift is from the first chauffeur, who has already satisfied his hunger by eating his bar!

Now, I'm not sure why I can't remember this particular advert, because it's a pretty decent one. But judging from the comments left by my followers on Youtube, hardly anyone remembers it!

However, the ad that is best remembered is the one featuring a cartoon squirrel called Toby which featured the slogan "A hazelnut in every bite".

The slogan for this advert was "Deliciously right when you feel like a bite", which I also don't really remember! So it seems the original 60s/70s advert definitely worked best for Mars. The chocolate bar launched in 1962. 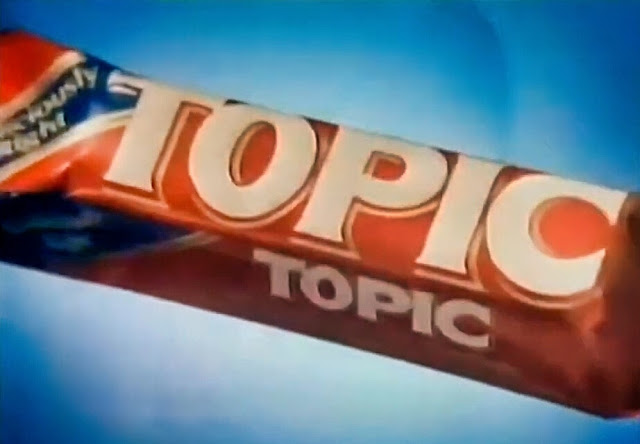