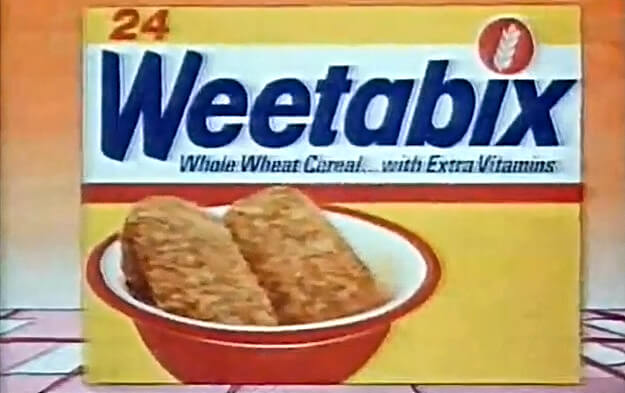 Now here's a classic British TV advert from the 1980s that just about everyone remembers - judging by the comments on my Youtube channel this is most definitely the case! It's the Weetabix gang singing their neat wheat mate song, okay?

The amusing advert first appeared in 1982 (scroll down the page to watch it) and a series of ads featuring the gang ran until 1989. There were also many printed adverts (around 15 in total) that were displayed in popular publications of the time.

The look of the gang resembles the skinheads/mods, with bracers, white shirts, boots and drainpie jeans, and they also have no hair - I'm not sure a hairy weetabix would look very appetising!

Do you remember the names of the gang members? Well, let me remind you! Dunk is the leader and doesn't wear any extra accessories, Brains (with the big geek glasses) is obviously supposed to be the intelligent one, Crunch (the muscle) is wearing a red and white striped hat, Brian (with the irritatingly screechy voice) is wearing a striped scarf in the same colours, and Bixie is the female one has a yellow hair bow.

The song is sung in an aggressive manner, and it's actually very odd that an angry gang which could be associated with football hooligans is advertising a breakfast cereal to kids. The ad could so easily have gone down like a lead balloon, but it didn't and it worked brilliantly, and it also became hugely popular. 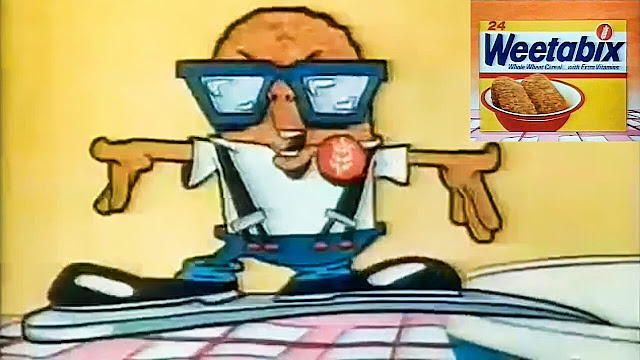 I would imagine the ad was particularly well-received by young boys, and speaking as someone who was a young lad at the time, just about anyone on the TV screen with a tough guy image often became someone who I wanted to imitate. Let me get one thing straight, though, I didn't shave my head and dress like a mod! But trying to act tough is just something that many young males naturally want to do, although not necessarily in a bullying or negative manner.

So let's take a closer look at the lyrics "Just one titchy bit of toast, we gotta put this straight, we're the Weetabix (yeah!). We don't like breakfasts fit for sparrows, nothing to 'em mate, we're the Weetabix. What we got in 'ere then, clear that stuff away, you make it neat wheat mate. If you know what's good for you, you do, okay! Weetabix, if you know what's good for you, okay!"

So the lyrics were very clever at putting the message across that other types of breakfast were inadequate and that if you want something substantial and good for you health, then it has to be Weetabix.

Also, what made the ad even more appealing was the aforementioned annoying screechy one (Brian) shouting "Okay?". He was deeply irritating but in a comical way, but it's actually the part of the ad I remember most!

Overall, this is a very well thought out advert and one that served Weetabix very well for the best part of the 1980s. 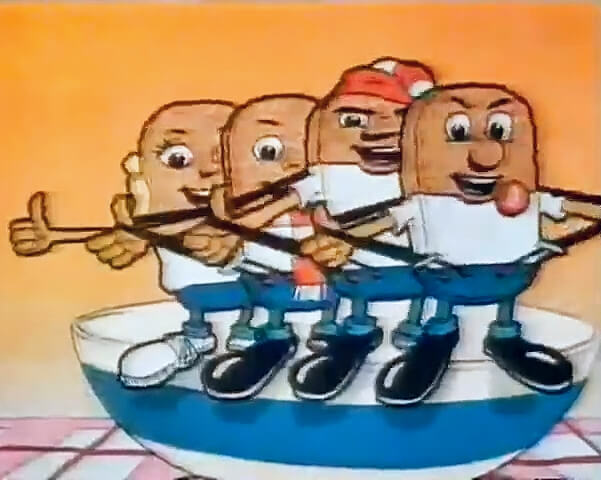