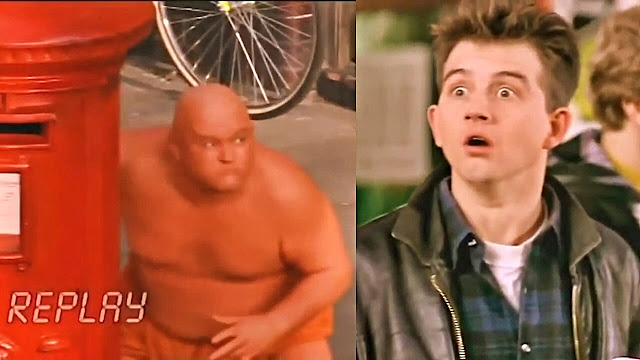 Back in the 1992, a certain advert for Tango fizzy drinks caused quite a bit of controversy and was eventually pulled. The infamous ad featuring the orange man was the first in a series of ads by Britvic you use the slogan "You know when you've been Tango'd".

In the ad, three young males are stood talking outside a fruit and veg corner shop. The orange man surprises the one Tango drinker by slapping him on the cheeks with both hands which suggested the "tango taste sensation" you would receive from drinking it. We only see the incident when the tape is put on rewind, which is a clever and amusing idea in itself. At this point, Ralph says "Hello Tony, I think we might use a video replay here". In the rewound version, the orange man can be seen hiding behind a letterbox and then running around before standing in front of the lad and giving him a big slap. The look on the guy's face is priceless!

Unfortunately, this led to kids across the United Kingdom Tango-ing each other and there were complaints galore from angry parents and teachers about kids not just being left with red, hand-marked faces, but also injury - there was, apparently, a child who was left with a damaged ear drum.

Although this particular ad was discontinued, the orange man appeared in two further ads, with the slapping being replaced by other forms of surprise such as kissing. The ad is widely seen as one of the best TV ads ever made in the UK, and it helped to boost sales of the soft drink by more than a third.

However, the initial concept of the ad was to have the orange man punch the Tango drinker in the mouth or kick him in the backside! Now that would have certainly caused controversy had it ever aired! The HHCL team eventually settled on a face slap in the style of Eric Morecambe. The ad is seen as a precursor the the noughties craze of "happy slapping".

The commentators are Ralph (voiced by comedian Hugh Dennis) and Tony (voiced by snooker player Ray Wilkins). The big bald guy painted orange is Peter Geeves. The ad was created by the agency Howell Henry Chaldecott Lury and Partners. The ads ran until 1996 and then returned again for a time in the Noughties.