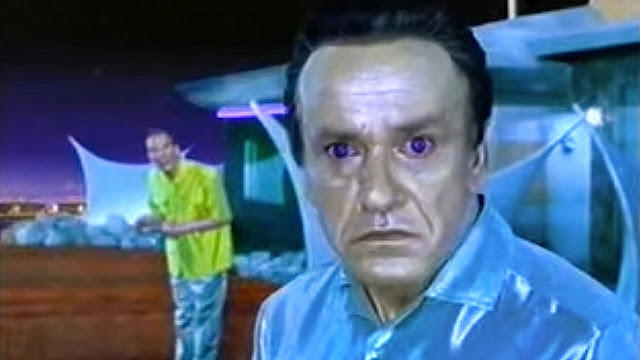 Levi Strauss and Co. never failed to come up with a memorable advert during the 80s and 90s, and some of them became iconic. That includes the ad for 501 jeans featuring the Russian model Kristina Semenovskaya, who arrives on a spaceship as the industrial dance track "Spaceman" by Babylon Zoo is played.

The setting is around a futuristic home, with a 1950s sci-fi movie style space age vision of the future. The advert itself was released in 1995, and looked very impressive indeed back then, and considering this was the 90s, the graphics have held up fairly well. I do like the cylindrical fireplace, and a ball of fire would look great in my living room!

The girl's mother is dressed in neon green and walks across the living room pressing her remote, which sets off some kind of hovering robo pet, which could possibly be a vacuum cleaner? The girl's father hears the spaceship arriving and ventures outside to greet his daughter. She arrives wearing only a shiny bra and a pair of Levi's 501's - do put some clothes on love, you'll catch your death out their!

Graphics aside, the other thing that gives away the fact that this was created in the 90s are two skateboarders with long, dreadlocked hair, who are transfixed by the girl's jeans, as is a man watering his plants.

The girl hands her father a set of keys (to the spaceship?) and walks off into the distance. I've never quite figured out where she is heading off too, though? Why does she not want to go into her home and have a chat with her parents? I guess that's teenagers for you! The ad's ending slogan is "The only jeans in the universe cut from 01 denim".

The "Spaceman" song features distorted guitars and a that iconic sped-up vocal intro and ending which was created by producer Arthur Baker. The vocals are provided by the band's frontman Jas Mann. The ad gave Babylon Zoo a No.1 hit in the UK, and also their five minutes of fame. Their album The Boy with the X-Ray Eyes reached No.6 and was mostly well-received by the critics.

However, the band's follow-up single "Animal Army" was only a minor hit, reaching No.17, and they never replicated the success of "Spaceman". The title track from the album stalled at No.32, and the group disbanded in 2000 after receiving negative reviews for their follow-up album King Kong Groover, which was, inevitably, a flop. 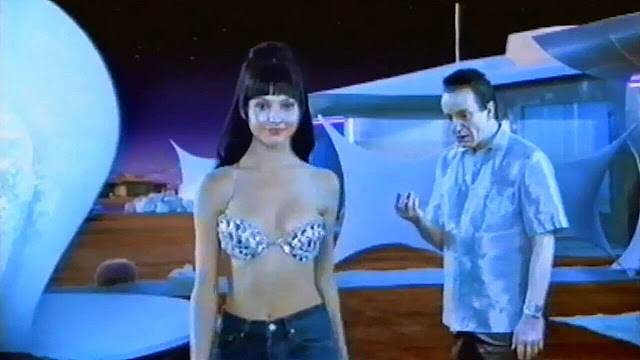