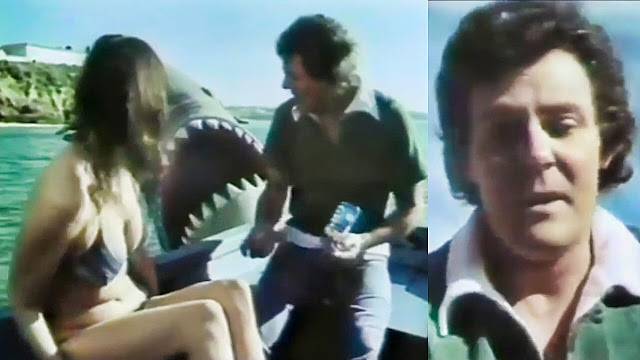 "When it comes to the crunch, it's KP" is the slogan for this 1976 UK TV advert, which is cashing in on the popularity of the first Jaws film, which featured an out-of-control, man-eating Great White shark.

Indeed, there can't be anyone who lived through the 1970s that doesn't remember the blockbuster movie. Directed by Steven Spielberg, the film became the highest-grossing of all-time, until Star Wars surpassed it in 1977 - it was certainly the talk of the school playground!

Look out for a very recognisable face, Trevor Bannister, who is best-remembered for his role as Mr. Lucas in the hit British sitcom Are You Being Served?

The advert starts with a screaming young lady in a pretty skimpy bikini (a common site in comedy on the TV during the 70s) clambering on to a rowing boat to escape from the shark, which, just like the movie, is causing all the beach-goers to run around in a frenzy, screeching and waving their arms around - calm down, it's only made of rubber!

On the boat is the aforementioned actor (who has an eye for the ladies in the sitcom (particularly Miss Shirley Brahms), who tries to calm down the distressed girl, "Don't worry, he's been around here all week... chuck him some crisps, that'll keep him quiet!".

After the shark starts rocking their boat, the girl let's out another screech and Bannister replies, "That's no good, it wasn't crunchy enough, it's not KP, chuck him one of those", as he opens a basket full of different flavoured KP crisps. "Go on, any flavour will do". Well, it seems to have done the trick and the shark seems very happy with his snack!

The advert ends with the deliberately cheap-looking rubber shark making an appearance next to the boat, which is pretty hilarious in itself. Bannister throws him some more crisps shortly after saying to the girl "What did I tell you... KP crisps... I think it's the only thing he comes here for".

You may also like this KP Discos TV Advert from 1976 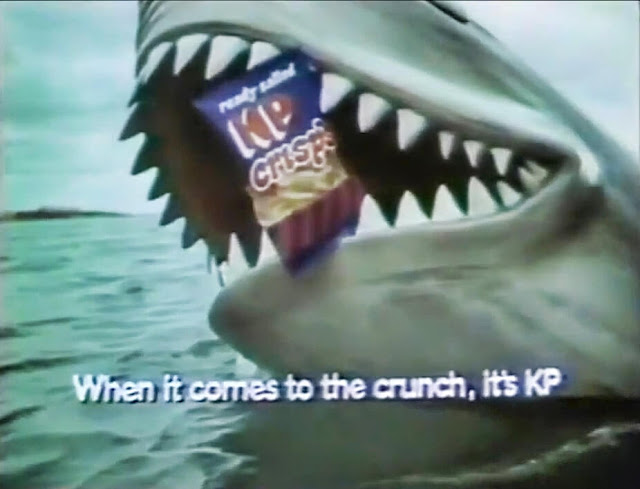