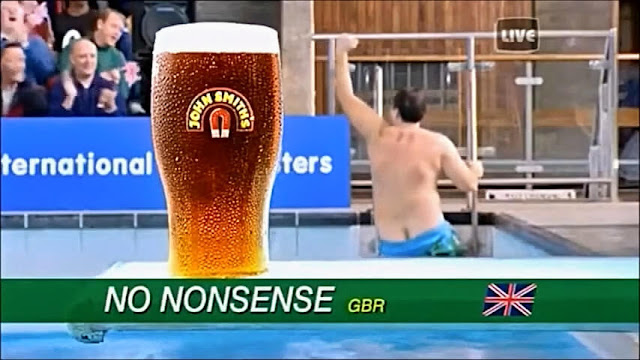 Now here is a no nonsense advert from the early noughties that I'm sure you will remember, and you can watch it at the bottom of this post. I will watch anything with Peter Kay in it, and just the sight of him on a diving board in his Bermuda shorts has me chuckling. He is just a naturally funny man who doesn't have to go to much effort to make me laugh.

This advert for John Smith's beer came out in 2002, in the same year as the Commonwealth Games. It's just one in a series of ads to feature the comedian. However, it's not the first ad to feature the "No nonsense" slogan - these started with Jack Dee in the 1990s.

The setting of the advert is a diving competition in an Olympic-sized swimming pool at the Commonwealth Games. We see two professional divers take their turn, making almost faultless dives with impressive somersaults and flipping, and receiving pretty high marks from the judges.

However, when the less than athletic John Smith (aka Peter kay) takes to the diving board, you just know this isn't going to be your average dive! He makes a brilliant running bomb dive which creates the biggest splash you've ever seen, soaking the judges and half emptying the pool! Well, maybe I exaggerated slightly about the latter, but the judges loved it and give him straight 10's! He is then seen climbing out of the pool with his shorts at half mast - a builder's bum with an aquatic theme!

Apparently, the comedian from Bolton had never been on a diving board before and was petrified when filming the ad. Well, I know how he feels, and my legs turn to jelly at just the thought of being up there so high. The sight of me with quivering legs on a diving board would have you in more hysterics than Peter Kay, I can assure you!

Since the mid 1990s, John Smith's bitter has been the No.1 bestseller in the UK. The brewery is based in Tadcaster in North Yorkshire, and was founded in 1852.

The first No Nonsense ad campaign ran from 1992 until 1997, and featured the misery guts comedian Jack Dee. They were very successful, increasing sales by a whopping 65%. By 1995, the brand was the No.1 ale on the planet! 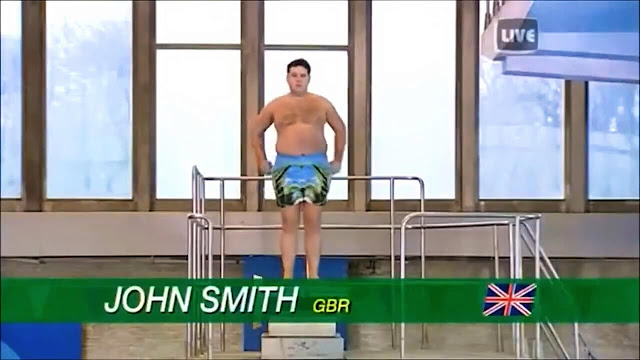