There are some adverts from the 80s that really stick in your mind, and this "Just One Cornetto" advert by Wall's Ice Cream is certainly one of them. This is actually the second one by Wall's UK, which first aired in 1981.

The advert features a guy and his girlfriend (who's hairstyle very much resembles that of Lady Diana in her early years) in a small rowing boat on a river. The girl is enjoying a cornetto and the guy starts singing the "Just One Cornetto, give it to me, delicious ice cream of Italy", except it is actually made in the UK, although has its roots in Italy, which I'll come to in a moment. The song then becomes more operatic, and is based on the late 19th century Italian opera song "O Sole Mio".

I remember around the time that when Cornettos were first introduced in 1976, they were priced at around 30p each, and more expensive that other items in the range such as Feast and Orange Frutie, both of which I also enjoyed. By 1981, the price had risen to 35p. There was also a Choco Rico cone that sold for 40p. The rival to Cornetto was King Cone.

The ice cream cone snack was first introduced in 1959, but didn't become available in the UK until 1976, when Unilever bought the patent from the Italian ice cream company Spica. It was sold by various subsidiaries of the company, which included Wall's in the UK. 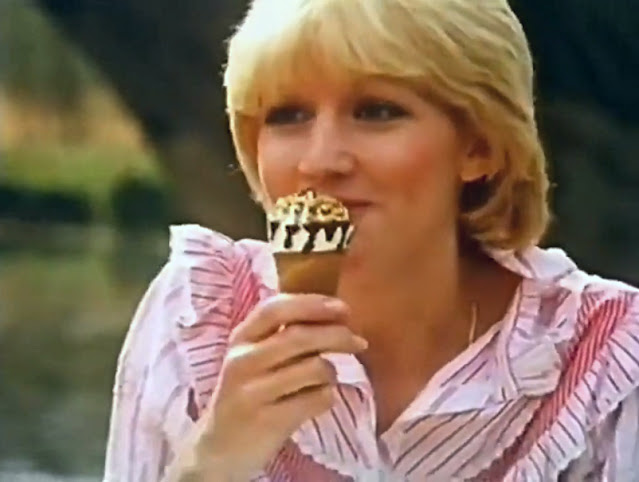