Posted by Mark Nobes on January 11, 2022
For today's post, I am going to take a look at a really interesting double page advert featuring some old computers and peripherals from the mid 80s, as well as an ad for the Apple Macintosh. Both are from the same issue of Personal Computer World, which was published in November 1984.

Talking of 1984, by then, the home computer revolution had well and truly taken hold, and the choice of computer brands and models back then was pretty overwhelming. Would I buy a ZX Spectrum, Commodore 64 or a BBC Micro? There were many more models available than this, though, and you may even have opted an Atari 800XL, MSX or Oric Atmos.

If you were running a business, chances are you may have chosen either an IBM PC or the brand new Apple Macintosh. You would have needed to have been pretty successful, though, as the Macintosh cost a whopping $1,995 to $2,495 (I'm not sure what this would be in £'s) which was pretty eye-watering in 1984 - this works out at over $6000 in today's money, which is still a substantial sum for a computer.

The Macintosh was the first mass-marketed computer to include a mouse, even though it was a pretty simple optomechanical device, with the main decoding circuitry inside the computer itself. It was also the first mass produced computer to include a graphical user interface. It also came with a 9 inch CRT monitor and was bundled with MacPaint and MacWrite. The original 128k model was discontinued on October 1st 1985 and was replaced by a 512k model.

The other advert I take a look at in the video is by a company called Spectrum (not to be confused with the computer), and it features a BBC Micro Model B as it's first home computer, which was built by Acorn Computers in Cambridge, England. At £399, it was expensive compared to other 8 bit machines, but it was used in a lot of schools across the UK and its main marketing focus was education. It was also successful as a home computer (despite the high asking price), selling 1.5 million units, although this nowhere near as popular as the ZX Spectrum, which sold 5 million units and was a lot more affordable.

Also advertised is its smaller brother, the Acorn Electron, which was half the price at £199. It was notable for its solid build, particularly the keyboard, which some would argue was even better than the one in the Model B. The 32k Electron was released in response to the launch of the ZX Spectrum, which was priced at just £125 for the 16k model. It had 16 colours (compared to just 8 in the Spectrum) with a maximum display resolution of 640 x 256. Compare that to the inferior 256 x 192 display of the Spectrum and you are, undoubtedly, getting much more machine for your money.

However, The Electron only sold around 250,000 units in total, and for the same price, you could buy the more powerful Atari 800XL with 64k, 256 colours and a top-loading ROM cartridge slot which allowed you to load games and other software almost instantly. The choice of games was more limited than the cassette games, and they were more expensive to buy, too. In fact, the only game I bought on a ROM cartridge was Frogger.

The 800XL was the computer my parents bought me, and it was my first home computer. After this, I would work hard to buy my own computers such as the Atari 130XE and ST, The one flaw with the XL/XE was Atari BASIC, which was not as easy to program as rival BASIC languages, but I still spent many an hour typing in listings from magazines and learning to program in the process. And it was a powerful machine, so you could create some pretty amazing graphical demos which would leave any ZX Spectrum owner with their jaw to the floor! 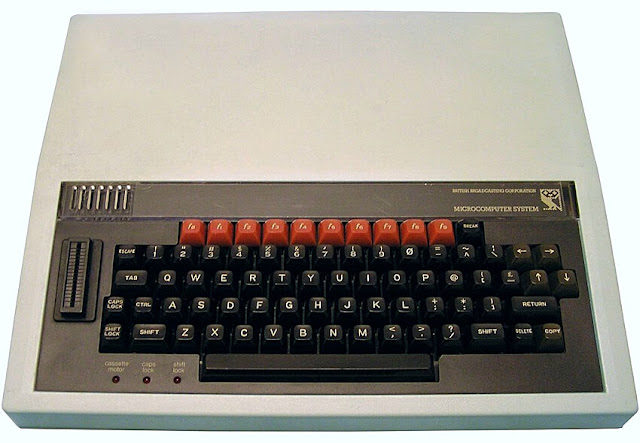 The other negative aspect of the Atari was the more limited choice of software available in the UK. Many stores stocked software (such as Boots and WHSmith), but they were usually all in one small section. I was always envious of the hundreds of titles on display for the C64 and Spectrum. Nonetheless, there were still plenty of budget titles that became available in the Mastertronic range, and you could also use mail order.

Also featuring in the advert are a number of disc drives and a cassette data recorder. The decision over which one to buy was often purely down to your budget back then. Most cassette recorders were around a quarter of the price of a disc drive, any if you were prepared to wait for up to half an hour for your game to load, it was a pretty good buy. However, I recall several times when the game would suddenly stop loading and you had to start all over again. And just one flaw in the cassette tape (such as a kink) would render your software useless.

The Atari 1010 program recorder was a pretty solid machine, and I never experienced too many problems with it, to be fair. There were many universal data recorders available such as the one by Shado featured in the advert. They were often cheaper to buy than the official machines such as the Atari 1010 or Commodore Datasette, for instance.

So did you buy a printer for their 8 bit. Well, the technology was very primitive back then. Nonetheless, the Atari 1027 letter quality printer was decent for the time and came with an ink roller, which meant there were no messy ribbons to fiddle around with as with an electric typewriter. I was almost tempted by the 1020 printer/plotter, which printed in 4 colours, but decided not to buy one as I didn't really have a need for it back then.

Well, I hope you enjoyed my post. I'll leave you with a couple of images to take a gander at. 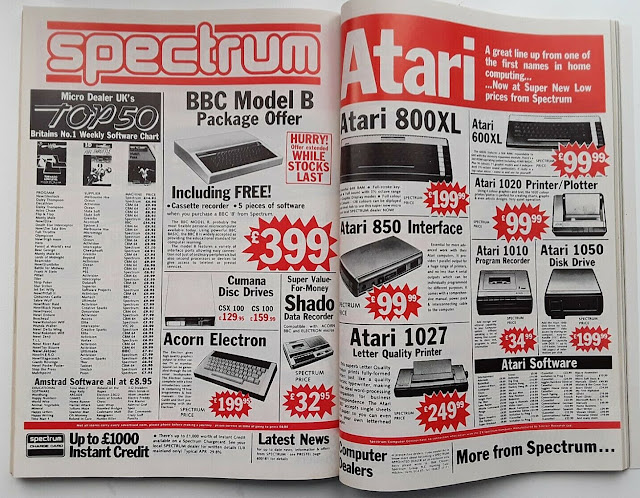 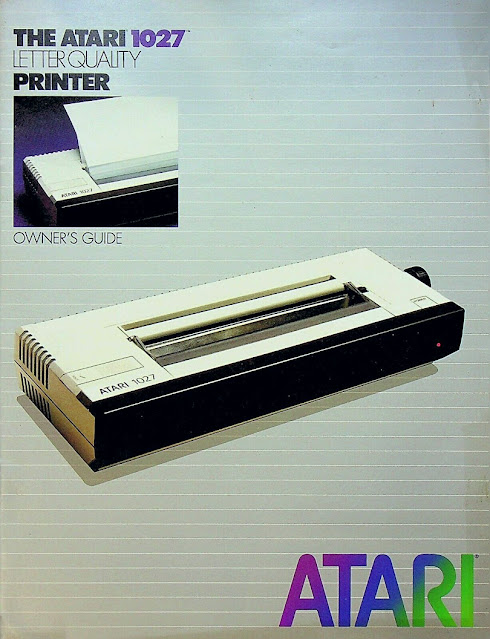