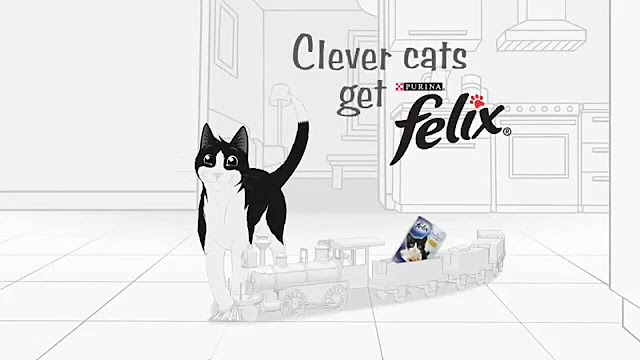 Today's post is especially for cat lovers, and further down you can watch a compilation of four TV adverts for Felix cat food by Purina. The animated cat is adored by millions of cat owners as much as the food is adored by their cats!

The first advert features Felix tickling his owner's foot, which is sticking out of bed while she is probably trying to enjoy a lie in! He eventually crawls under the duvet to get his owner's attention and she gives up and goes to serve him his breakfast - at long last, thinks Felix!

The second ad features the female owner on the phone to Jenny (whoever she is!) and discussing the new As Good As It Looks Felix cat food. She explains to her friend "It looks almost home made...very posh looking". Meanwhile, Felix is trying to climb up to the cat food in the kitchen and gets caught out by the draws.

In the third advert, Felix is in a very playful mood and dives into the pile of leaves that his male owner is trying to rake up. He then puts his dirty paw marks all over the windows that his female owner is cleaning. I find it rather amusing that the posh-sounding owners are very reserved with their replies; "Oh, Felix!". That's delightfully upper-middle class, I'm sure. If I found my cat putting it's dirty great paws on my windows after I had just cleaned them then I would be using words that would turn the air blue! This ad is, like the previous one, promoting As Good As it Looks.

The fourth and final advert is the newest of the bunch, and it features the animated feline being clever. Firstly, he plays with the camera and then rolls over and stretches himself. He then chases after a can of Felix which is being carried along on the back of a toy steam train.

The black and white cat has been the mascot for felix cat food since 1989. The brand has been owned by Nestle Purina Petcare since 1997. Since 2018, the wet food has been sold in pouches rather than tins, due to a decline in demand for the latter. For a time (starting in 1996), the Felix brand overtook Whiskas as the marketleader in the UK. 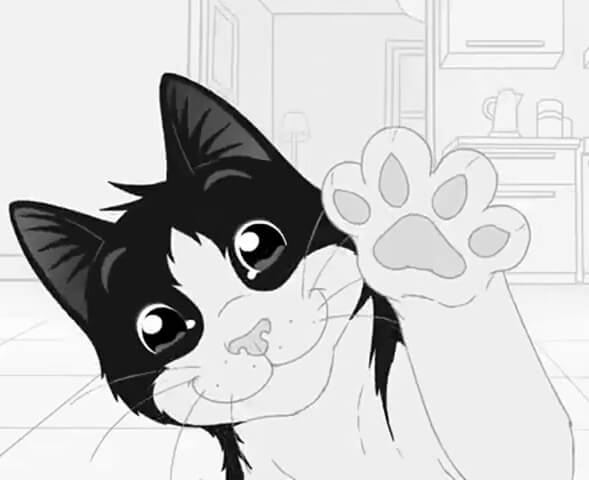