So did you have an Action Man doll back in the 70s? I certainly did, and he had gripping hands and eagle eyes, too!

This 70s TV advert (further down the page) by Palitoy for the Action Man Transport Command series was shown on ITV in 1977. It features a range of military toys and accessories, including a tank, gun emplacement, Willy's Jeep, motorcycle with sidecar, helicopter (Assault Copter), with prices from £5 to £9.25. They're advertised as "tough, realistic models" by the narrator Patrick Allen, who also did the Protect and Service public information films.

I never actually had an Action Man tank, and my parents opted for a personnel carrier instead. I know, that sounds pretty boring compared to a tank, and initially I was disappointed. However, I grew to like it when I went back to school after Christmas, as it enabled all of my friends to put their dolls inside so we could steer it around the playground. Turned out that everyone wanted one after this - who'd have thought it!

My doll had fuzzy blonde hair (introduced in 1973 and invented by Bill Pugh) and flexible gripping hands, but I remember one of my friends having an earlier late 60s model with black plastic hair and solid vinyl hands that couldn't grip any accessories very easily. So the doll did develop somewhat through the 1970s. 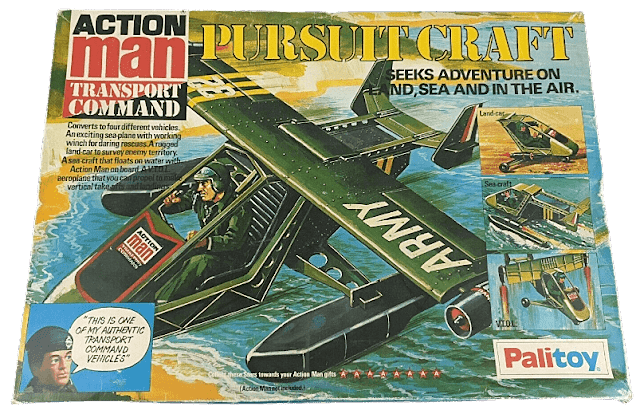 The action figure first launched in 1966, just a couple of years before I was born. It was sold by Palitoy (based in Coalville in  Leicestershire, England) until 1984, with a mainly military theme in the UK and Australia. They were based on Hasbro's G.I. Joe figures sold in the U.S., and were sold in the UK as Action Soldier, Action Sailor and Action Pilot with plastic hair in blonde, brown, black and auburn colours.

The flocked (fuzzy) hair was introduced in 1970 which felt soft to touch. along with the fixed blue eyes. The eyes were brown before this and simply painted on (known as "soft" painted heads). There were some dolls produced with brown eyes and fuzzy hair, which are now very rare. In 1976, eagle eyes were introduced which featured a lever on the back of his head to move the eyes left and right. However, the head became slightly larger with different facial features. These came with brown and blonde hair, blue eyes and also a bearded version. 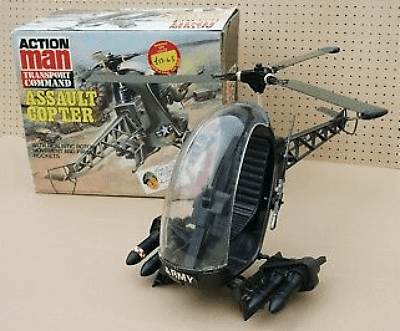