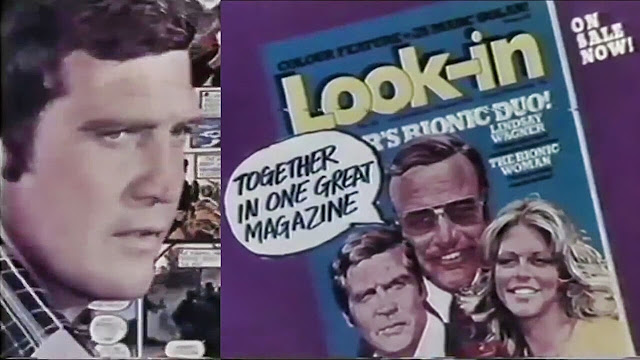 So how many of you remember reading Look-In magazine? I used to have quite a stack of them, although not as many as my neighbour who had just about every issue during the 1970s! The TV advert (which you can watch at the bottom of this post) is from July/August 1976, and I certainly remember this issue - it seems like only yesterday when I was watching Steve Austin, The Six Million Dollar Man on TV - he was played by Lee Majors, who went on to star as stunt man Colt Seavers in The Fall Guy during the 1980s.

The Bionic Woman became the most popular sci-fi series of the 70s in the UK, and was the first and only sci-fi TV series to reach No.1 in the ratings during the entire 20th century. The lead character was Jamie Sommers, who was played by Lindsay Wagner. I remember that all the girls wanted to be her, and all their dads fancied her!

As a young lad, I was completely nuts about the bionic man, and I had a Six Million Dollar Man doll which had a mini telescope as his bionic eye, which was very cool at the time. It also made me very popular in the school playground, and he was like a futuristic Action Man, I guess. I remember he had a red jumpsuit and also came with a plastic engine which you could use to demonstrate his strength!

Look-In was a weekly magazine which was labelled as the "Junior TV Times". I used to get very excited when I saw a new issue in the newsagents, and the artwork on the front played a big part in this. The illustrations on this particular issue (week ending 7th Aug 1976) are very good indeed and really resemble the characters - this wasn't always the case!

From 1981, the magazine started using real photos for many of it's covers. This front cover features Oscar Goldman (played by Richard Anderson in the TV series, who is the head of the Office of Strategic Operations), and the aforementioned Steve Austin and Jamie Sommers.

At this time, the magazine also featured comic strips for both The Six Million Dollar Man and The Bionic Woman, with both TV series being hugely popular here in the UK.

Also in this issue, there was a colour feature for Marc Bolan from T-Rex, and the price, by the way, was 8p. Ah, I have a 10 pence in my pocket, that leaves me with 2p to buy some penny sweets, he he! 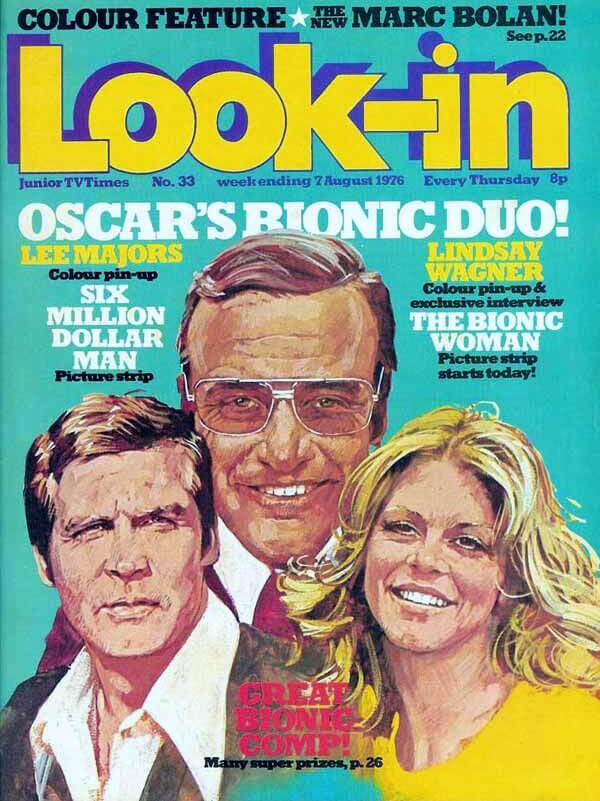