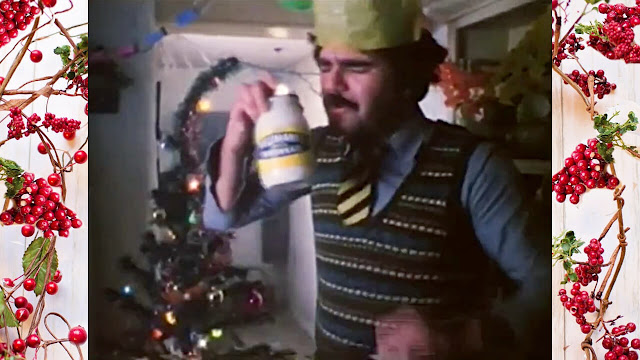 Anyone who lived through the 1980s will certainly remember Bob Carolgees, who first found fame on the Saturday morning kids TV show TISWAS, and also the adult spin-off show OTT.
He also featured in a series of TV adverts for Hellmann's mayonnaise, including this Christmas TV ad from 1985, which includes the slogan "Don't save it for the Summer".
Carolgees is probably most famous for his Spit the dog puppet routines, and he also worked alongside Cilla Black for around 8 years on Surprise Surprise, which aired on ITV during the 1980s and 90s.
In this advert, we see a giant turkey on the table which was won in a raffle. Bob pops up from behind it (he can be seen wearing a yellow paper crown hat from a Christmas cracker) and blows one of those party blowers that were popular back in the day. "It was July before we had to feed the cat again!", is a funny line I still remember to this day!.
Next, he tells us "Luckily, Santa left me a thick, creamy jar of Hellmann's, it was the best Christmas ever!". Well, you're certainly going to need something to take away the dryness of that over-sized turkey, Bob! He finishes by announcing "Gran said if Dad ate any more turkey he'd end up looking like one!"
I'm not sure why I remember this advert so clearly compared to many others from the 80s, although a Youtube friend of mine also said the same thing, so, I guess, it was clever advertising given the fact we remember it so vividly here in 2021.
Now I do like a jar of Hellmann's, I have to say, although I never eat turkey at Christmas as I don't like it all that much. I prefer beef, although it's extremely expensive these days! I would actually be quite happy with a pork chop and some apple sauce!
You may also like this Coca Cola Christmas Trucks advert from 1996
80s Ads Christmas Food