So who remembers wearing a Frankie Say Relax T-shirt? I certainly do, although I had a friend who was so fed up with me rabbiting on about my favourite 80s band, he bought a "I don't give a sh*t what Frankie Says" T-shirt just to annoy the hell out of me!"

I certainly remember one of the TV ads, too, but was surprised to discover four of them, so I decided to create a compilation video which you can view at the bottom of this post. The one I remember is narrated by David Frost and advertises Frankie Goes To Hollywood's debut double LP Welcome To The Pleasuredome. The animation and the artwork for the album is what I remember most, and ZTT certainly put in the effort to create something memorable. Indeed, Trevor Horn is a producer I really admire, as he is such a perfectionist and spent a great deal of time working on their songs and reworking them until he was 100% satisfied with the end result. 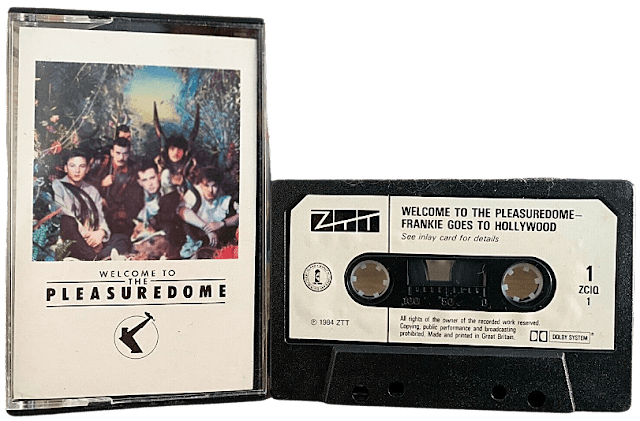 The other advert for the album is, amusingly, narrated by the Radio One DJ Mike Read. Well, he was a good sport for doing so, as he was, of course, partly responsible for BBC's ban on their debut "Relax" single, stating that the lyrics are "obscene" while playing the 12 inch on his radio show on January 11th 1984. However, some reports suggest that the BBC had already decided to ban the band from performing the song on Top Of The Pops before this, so I am unsure as to whether he was entirely responsible.

Shortly before the ban, the band performed the song on the 20th Birthday edition of the music show on 5th Jan 1984, after climbing to No.35 in the UK singles chart, so they certainly were not banned then! They jumped to No.6 the following week and then No.2 on 15th Jan, two days after after being banned. The following week, the band hit the top of the chart and remained their for five weeks.

The other two adverts are for the singles "Relax" and "Two Tribes", the latter being narrated by Patrick Allen, who also narrated the Protect and Survive nuclear public information films which explained what to do after a nuclear attack. He re-created these for the band's extended versions on the 12" singles and the album version.

"Two Tribes" spent nine weeks at No.1 in the UK, making it the longest-running chart topper of the 1980s. During this period, "Relax" reached No.2, although the single had already been steadily climbing up the chart for a second time long before the release of "Two Tribes". Indeed, the song has spent an incredible 70 weeks inside the UK Top 100.

So Frankie reigned supreme in the charts during 1984, and although they would not replicate this success with their 1986 comeback single "Rage Hard", they certainly left an impression, and it's a year that was, for many people, the best year ever in pop music.