Posted by Mark Nobes on December 09, 2021
Just about everyone recognises the Coca Cola Christmas trucks, and this classic advert from 1996 is promoting Santa Packs. I'm not entirely sure if this particular advert was actually shown in the UK, and I can't remember whether we had the Santa Packs offer over here, but the line of trucks covered in Christmas lights and the animated Santa on the rear of the last wagon are iconic.
The "Holidays are coming" song is also iconic, and it was used in the 1995 ad, but for this advert the lyrics are replaced with "Santa packs are coming". A new, shorter ad came out in 2020 featuring recycled scenes from the 90s ads.
In the advert, all the Christmas tree lights magically turn on when the first truck passes them, with the two kids looking at them in amazement. Then we have the guy on his ladder putting up fairy lights on his house, and they all light up, too. When the fleet of trucks drive over the bridge, this lights up, too.
In the final scene, a boy and his dad are sat in their pick-up truck watching the trucks pass by, and then we have that aforementioned Santa animation on the rear truck in which he drinks his Cola and raises his bottle as he approves the taste.
This is such a joyous, magical advert, and I much prefer it to many of the modern ones which often miss the mark or are too concerned with political correctness.
I feel the need for a glass of Coke now!
Danny Dyer Coke Advert from 1994
Tango Orange Man Advert 1992 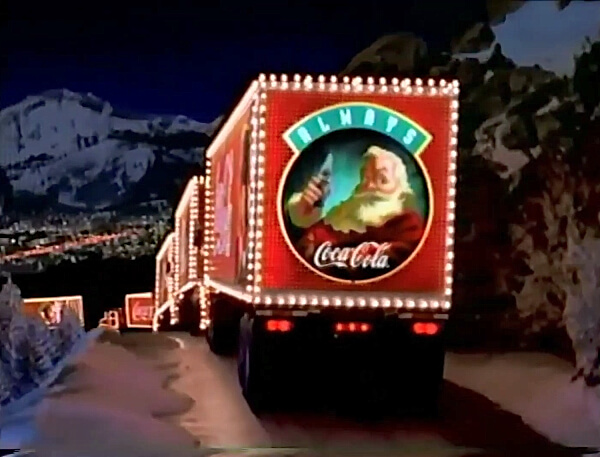