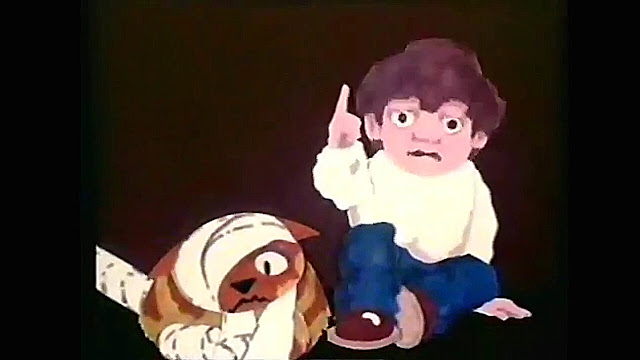 Charley's Tea Party was the fifth in a series of six Charley Says public information films released in the 1970s. They were produce by Richard Taylor Films, who also created the Protect and Survive nuclear attack warnings. In this one, we are taught about the danger of the table cloth. Really? Well, pulling a tablecloth from a fully laid table and pretending your a magician is probably never going to work. And when your cat does it, it can only end in disaster. Poor Charley the cat ends up with a teapot pull of boiling tea spilling all over him, and broken cutlery and food scattered around him.
Next we see him all bandaged up and emitting those garbled meows that make him sound like he's on crack. Indeed, it have been safer if he had taken crack rather than trying to reach for that fish! Now just what kind of a party is this? There is just half a loaf of bread, some fish and some tea. No wonder there aren't any guests!
The disaster-prone feline became something of an icon after The Prodigy released a single called "Charly" which reached No.3 in the UK singles chart during 1991. The samples were taken from the fourth film "Mummy Should Know".
When I watch these films now, it makes me wonder how I even made it the the 80s! Somehow, I got throught the 70s without setting myself on fire, drowning or having a nuclear bomb dropped on my head!
In all seriousness, though, these simplistic animations really did their job very well, and the safety messages did actually stick with me through my childhood.
Protect And Survive: Nuclear Explosions Explained 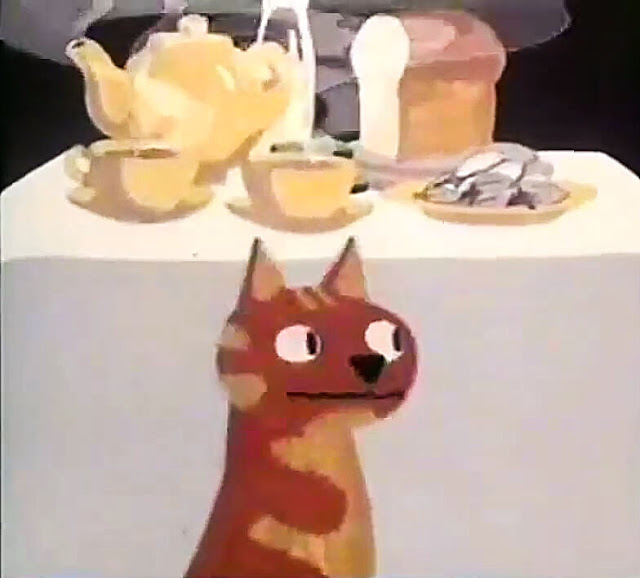