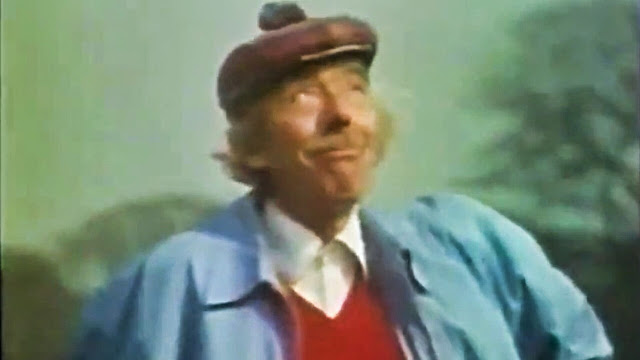 Just about anyone who lived through the 1970s will remember the Cadbury's Fruit and Nut Case adverts. I certainly remember singing the song at primary school and everyone giggling and calling each other fruit and nut cases!

The advert features the English comedy writer Frank Muir. After appearing in a series of ads for the chocolate bar, Muir became a household name and made quite regular appearances on TV, such as on TV game shows - I'm pretty sure he was on Blankety Blank. In the adverts, he sings to the tune of Danse des Mirlitons from Tchaikovsky's The Nutcracker. Of course, I had to look that up as I know absolutely nothing about ballet music!

It's amazing just how much of this amusing advert I remember, some 45 years later. I remember almost all of the scenes, and this particular ad features a painting falling on an art gallery security guard, morris dancers dancing outside the Ye Olde Fruit and Nut pub, an ancient greek/Roman man being fed grapes by a lady, and a squirrel popping out of a tree with the chocolate bar, which had a mainly white wrapper at the time - these days it is part of the Dairy Milk line.

We also see Frank Muir singing in the bath and then on a golf course, with the hole flag being replaced by the chocolate bar and swiping the ball away. Near the end, we see a guy working out next to a giant, flexible Fruit and Nut bar.

The ad ends with Muir stating "It's a good tune, isn't it!". 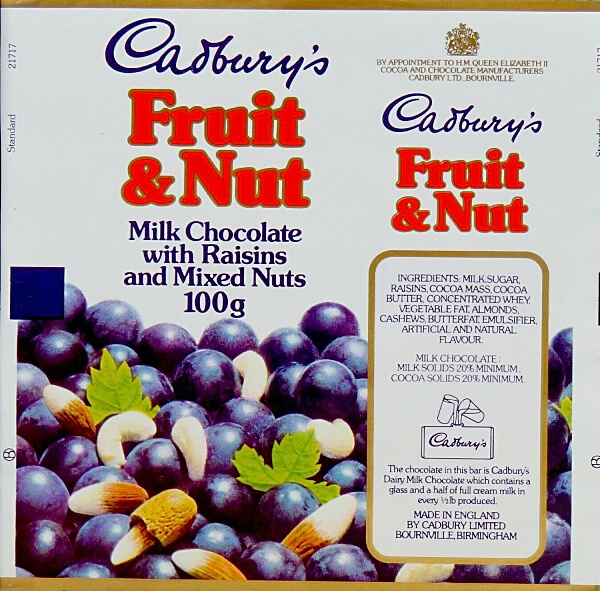 I'm not certain of how much the recipe has changed since the 70s, but you can clearly see the ingredients on this wrapper, which included almonds, cashews and raisins. Today, cadbury lists the raisins as "dried grapes" which I'm pretty sure is what raisins are!