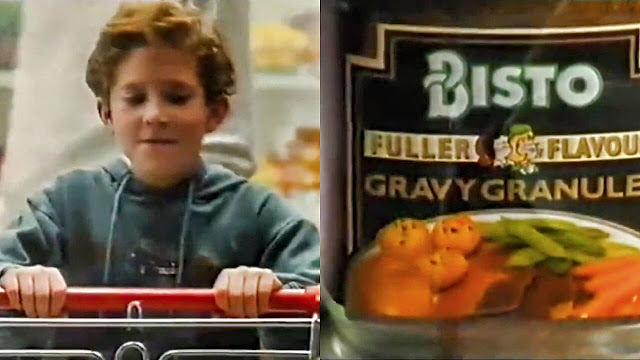 Aah, Bisto! There have been very many different adverts for the popular British gravy brand, and the one featured at the bottom of this post is from 1991, which is promoting their new fuller flavour gravy granules. The other British dried gravy favourite is, of course, Oxo, and I hope to features these ads sometime in the future, too.
The amusing ad is set in a supermarket and features a young lad with his dad and a friend.
So here's the scene. While while walking down an aisle, a friend appears and shouts "Oh Jim, how are you?" while hiding a bottle of wine behind his back - it seems he was not expecting to see the pair. We find out his name is Cliff, and he talks to the young boy (Neil) and asks him one of the dumbest questions you can ask someone in a supermarket. "Shopping are you?". Neil replies "Yes, we're having chops with this new Bisto gravy". Looking very awkward, Cliff replies "I just popped in for a bottle of wine, you know, someones coming for dinner". After saying his goodbyes, the young lad turns to his dad and says "I think Mum prefers white wine", and the pair giggle together.
It seems that Cliff has been caught out and you can't hide anything from kids, of course, who are experts at revealing the truth!
Well, I hope you enjoyed this Bisto ad from the early 90s. It's definitely from a time when adverts were more straightforward but often funny. There are many more to come!
Hellmann's Mayonnaise Advert with Bob Carolgees 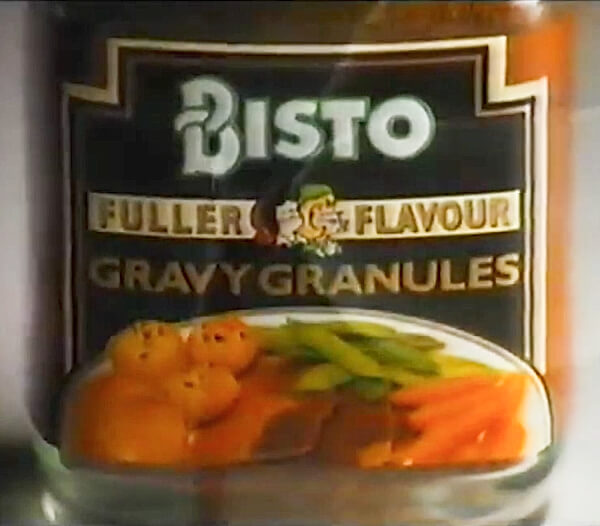