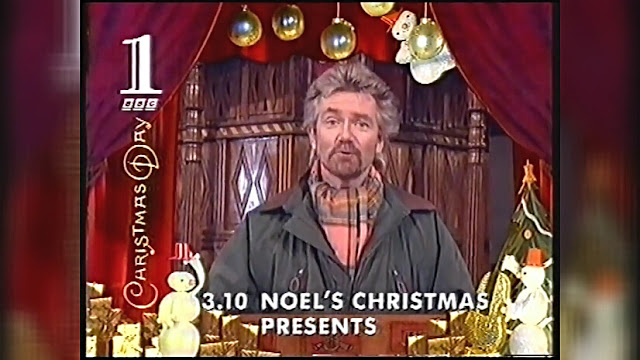 It's always interesting to see just what we were watching on TV back in our younger days. This trailer is for Christmas Day afternoon on BBC1, and I remember the snowmen animation like it was yesterday!
The first thing you will probably notice in the video clip at the bottom of this page is just how young Ian Beale (Adam Woodyatt) looks! He looks about 12, and it's interesting comparing him to how he looked recently on the 2021 series of I'm A Celebrity Get Me Out Of Here. The actress next to him is, of course, a fresh-faced Michelle Collins, who plays Cindy Beale.
At 2.00pm was Top Of The Pops. The last time I watched this was probably in the late 90s, but this episode I most probably watched and it is presented by Take That. We also see Mariah Carey and Marti Pellow from Wet Wet Wet in his longer hair days. I remember it became kind of trendy for 80s pop stars to start growing their hair longer, and even Rick Astley was at it! It's as if they were trying to shake off their clean cut 80s image to try and stay popular with the 90s pop kids. We also briefly see Peter Cunnah from D:Ream, and their hit "Things Can Only Get Better" later became an anthem for Tony Blair's Labour Party.
The Queen's Christmas message was, of course, at 3:00pm, as it still is, followed by Noel's Christmas Presents, which featured surprises and reunions. It's a programme I always thoroughly enjoyed watching with my Mum and gran. I lost my Dad in 1989, so it was just the three of us back then.
At 4:10pm it was Animal Hospital Christmas. I really liked Rolf Harris back then, and it was hugely disappointing and shocking when the sexual abuse allegations came out.
A repeat showing of Wallace & Gromit's The Wrong Trousers aired at 4:55pm, and this featured the voice of the wonderful Last Of The Summer Wine actor Peter Sallis. The hugely popular stop-motion animation just wouldn't have been the same without him. This was the second animation in the series, with the first, A Grand Day Out, airing on 4th November 1989. The Wrong Trousers was first shown on Boxing Day in 1993.
At 5:25pm was the Roy Clarke sitcom Keeping Up Appearances, featuring Patricia Routledge as the snobbish Hyacinth Bucket - it's pronounced "Bouquet" don't you know! Clive Swift starred as her long-suffering husband, Richard. I adored this series, but I particularly like the beer-guzzling slob, Onslow, played by the brilliant Geoffrey Hughes. He had previously played the bin-man Eddie Yeats in Coronation Street, which I also remember him as.
Finally, at 6:15pm it was the soap Eastenders, and you will notice that Grant Mitchell (Ross Kemp) actually had hair! I stopped watching Eastenders some time in the 90s, but I think I was still watching it in '94.
So, that was quite some line-up, and I would probably have watched many of these programmes with my Mum and Gran on Christmas Day back in 1994.
BBC1 Christmas Day 1985 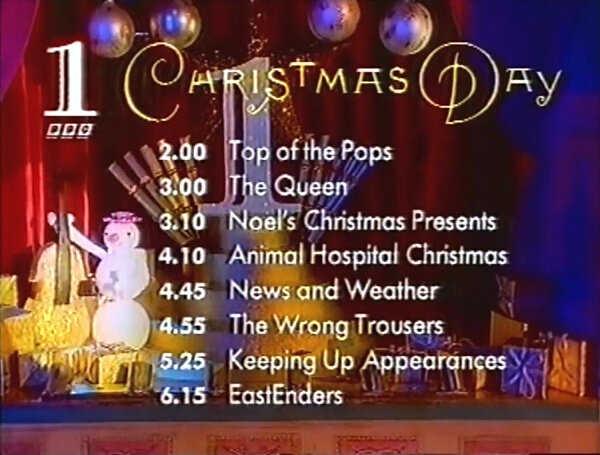